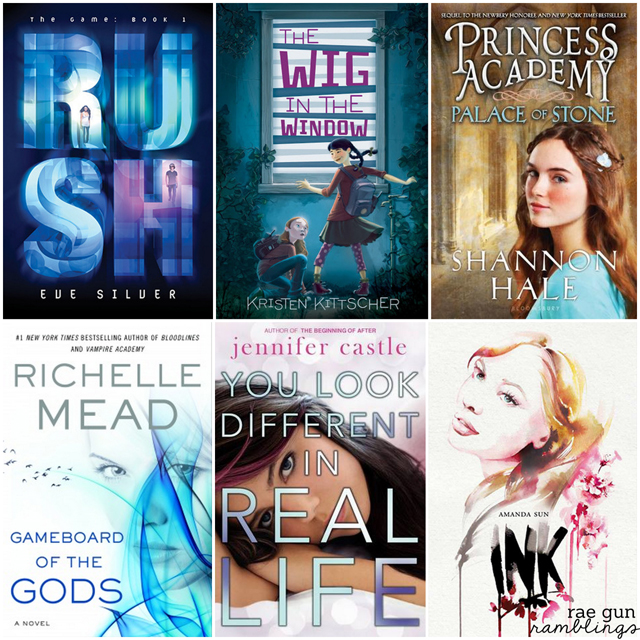 If you are looking for some book recommendations here are some of the books that I’ve recently read. They were kind of a diverse bunch that I think think would be appealing to different people so I’ve included the little blurb from goodreads and a quick mini review for each.

Rush by Eve Silver – When Miki Jones is pulled from her life, pulled through time and space into some kind of game—her carefully controlled life spirals into chaos. In the game, she and a team of other teens are sent on missions to eliminate the Drau, terrifying and beautiful alien creatures. There are no practice runs, no training, and no way out. Miki has only the guidance of secretive but maddeningly attractive team leader Jackson Tate, who says the game isn’t really a game, that what Miki and her new teammates do now determines their survival, and the survival of every other person on this planet. She laughs. He doesn’t. And then the game takes a deadly and terrifying turn.

I thought this was a really interesting action adventure. It definitely appealed the video game world I am so fond of. If you have a warm place for video games or books about them (like Insignia or Ready Player One) you should definitely check out this book. It took me a second to get into it but once I did I couldn’t stop listening (I listened to the audiobook), I’m excited to see what book 2 holds for these characters. See my full review here.

Wig in the Window by Kristen Kittscher – Best friends and seventh graders Sophie Young and Grace Yang have made a game out of spying on their neighbors. On one of their midnight stakeouts, they witness a terrifying, bloody scene at the home of their bizarre middle-school counselor, Dr. Charlotte Agford (aka Dr. Awkward).

At least, they think they do. The truth is that Dr. Agford was only making her famous pickled beets! But when Dr. Agford begins acting even weirder than usual, Sophie and Grace become convinced that she’s hiding something—and they’re determined to find out what it is.

Soon the girls are breaking secret codes, being followed by a strange blue car, and tailing strangers with unibrows and Texas accents. But as their investigation heats up, Sophie and Grace start to crack under the pressure. They might solve their case, but will their friendship survive?

Perfect for fans of The Mysterious Benedict Society, The Wig in the Window is a smart, funny middle-grade mystery with a REAR WINDOW twist.

If you like middle school sleuths this ones for you. With lots of twists and turns The Wig in the Window is a fun unearthing of the truth. I found it a tiny bit long for my tastes but I’ve never been a huge mystery gal but if you like jr. detective kind of stuff it’s a cute one. See my full review here.

Palace of Stone by Shannon Hale – Coming down from the mountain to a new life in the city is a thrill to Miri. She and her princess academy friends have been brought to Asland to help the future princess Britta prepare for her wedding.There, Miri also has a chance to attend school-at the Queen’s Castle. But as Miri befriends students who seem sophisticated and exciting she also learns that they have some frightening plans. Torn between loyalty to the princess and her new friends’ ideas, between an old love and a new crush, and between her small mountain home and the bustling city, Miri looks to find her own way in this new place.
Picking up where “Princess Academy” left off, and celebrating the joys of friendship, romance and the fate of fairy tale kingdoms, this new book delivers the completely delightful new story that fans have been waiting for.

I think I may have liked this more than the first book. It’s got some great things for readers young and old to think about without never being preachy and the story and characters are good fun too. See my full review here.

Gameboard of the Gods by Richelle Mead – In a futuristic world nearly destroyed by religious extremists, Justin March lives in exile after failing in his job as an investigator of religious groups and supernatural claims. But Justin is given a second chance when Mae Koskinen comes to bring him back to the Republic of United North America (RUNA). Raised in an aristocratic caste, Mae is now a member of the military’s most elite and terrifying tier, a soldier with enhanced reflexes and skills.

When Justin and Mae are assigned to work together to solve a string of ritualistic murders, they soon realize that their discoveries have exposed them to terrible danger. As their investigation races forward, unknown enemies and powers greater than they can imagine are gathering in the shadows, ready to reclaim the world in which humans are merely game pieces on their board.

This was definitely a slow starter for me (but I feel like that for all of Mead’s book 1 of series). But it was definitely worth pushing through because it was a super interesting tale with some great characters. I’m excited to see what’s next in the story. This is an adult novel so it does have drugs and sex but I didn’t find it too crazy and I’m use to YA level stuff. See my full review here.

You Look Different In Real Life by Jennifer Castle – For the rest of the world, the movies are entertainment. For Justine, they’re real life.

Now sixteen, Justine doesn’t feel like a star anymore. In fact, when she hears the crew has gotten the green light to film Five at Sixteen, all she feels is dread. The kids who shared the same table in kindergarten have become teenagers who hardly know one another. And Justine, who was so funny and edgy in the first two movies, feels like a disappointment.

But these teens have a bond that goes deeper than what’s on film. They’ve all shared the painful details of their lives with countless viewers. They all know how it feels to have fans as well as friends. So when this latest movie gives them the chance to reunite, Justine and her costars are going to take it. Because sometimes, the only way to see yourself is through someone else’s eyes.

Smart, fresh, and frequently funny, You Look Different in Real Life is a piercing novel about life in an age where the lines between what’s personal and what’s public aren’t always clear.

This was such an interesting idea and the story tell was perfect. If you’re drawn in by the synopsis at all I say definitely check it out it was a very fun read. See my full review here.

Ink by Amanda Sun – On the heels of a family tragedy, the last thing Katie Greene wants to do is move halfway across the world. Stuck with her aunt in Shizuoka, Japan, Katie feels lost. Alone. She doesn’t know the language, she can barely hold a pair of chopsticks, and she can’t seem to get the hang of taking her shoes off whenever she enters a building.

Then there’s gorgeous but aloof Tomohiro, star of the school’s kendo team. How did he really get the scar on his arm? Katie isn’t prepared for the answer. But when she sees the things he draws start moving, there’s no denying the truth: Tomo has a connection to the ancient gods of Japan, and being near Katie is causing his abilities to spiral out of control. If the wrong people notice, they’ll both be targets.

This one took me a second to get into but once I did I really enjoyed it. I loved the American girl in Japan and the magic of art coming alive was so fun. It does suffer a tiny bit from instalove/I can’t live without him syndrome but the rest of the book was good enough I still think it’s worth checking out. See my full review here.