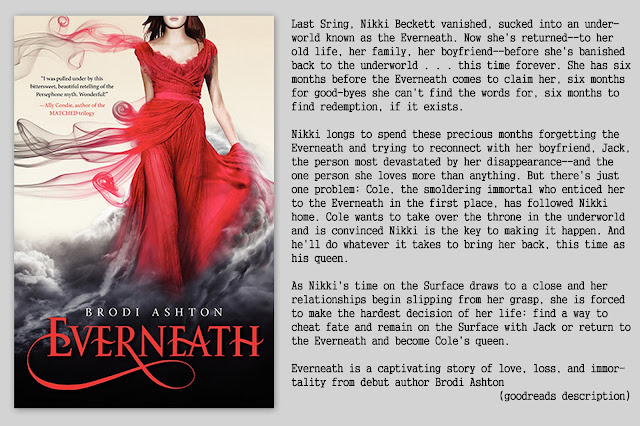 I wasn’t sure what to expect when I picked up Everneath by Brodi Ashton but when I read that it was a retelling of Persephone’s story I was immediately intrigued. This is a great read for those who like a school setting, cute musicians, and a mythological retelling. As an extra perk for us Utah girls this takes place in Park City, UT fun right?
Most of the action happens between 3 main characters. While other characters are introduced throughout they have very minor rolls. Usually I need more interaction from a book but somehow this one made it all work. While I wouldn’t consider it particularly deep there were many points that I thought that is a lovely line. The characters were likeable, relatable, and very believable. There wasn’t any of that stupid frustrating behavior that you get in many ya books. This was a fun, fast, delightful read.
Great for fans of Twilight but Twilight haters don’t be scared off because it has none of the annoying things that people whine about with those books. Nikki is a realistic teen trying to make the best of a few hard situations (not pathetic at all). Cole is an interesting villain with aspects that make you question his evilness. And Jack is what you want from a boy, devoted but not so shallow and smitten but not without caution.

My only reservation is that at one point after many references to Greek mythology, Egyptian mythological terms were thrown in with no explanation of similarity/differences or just introduction. It confused me. I’ve seen this in other books that work with mythological ideas but thought the extra info without any intro was bizarre and I am still a bit confused by it. Maybe I need to learn more about mythology and it will make sense. But this was such a minor part and just a tiny distraction that didn’t interfere with me thoroughly enjoying the tale. I am super excited to read more in the Everneath series. 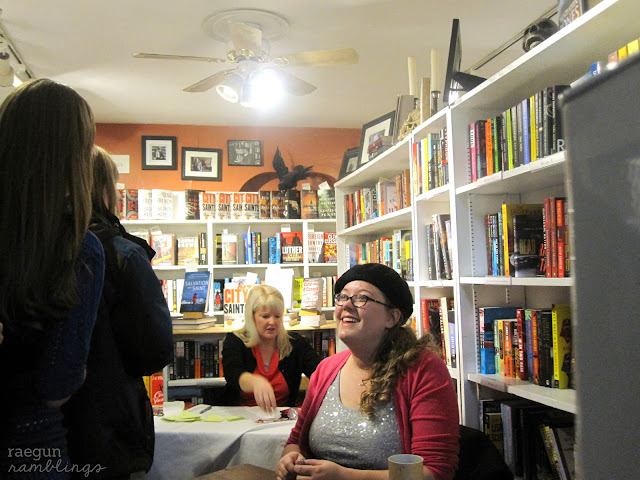 Luckily I didn’t have to wait long for the sequel Everbound. Brodi (on the left) and The Kings English book store had a release party together with Cynthia Hand of the Unearthly series. It was a blast hear more from both authors about world building and writing. They were both darling. Here are some fun pictures from event. 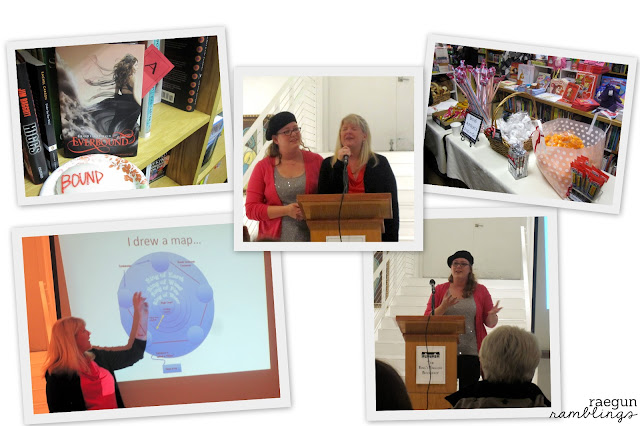