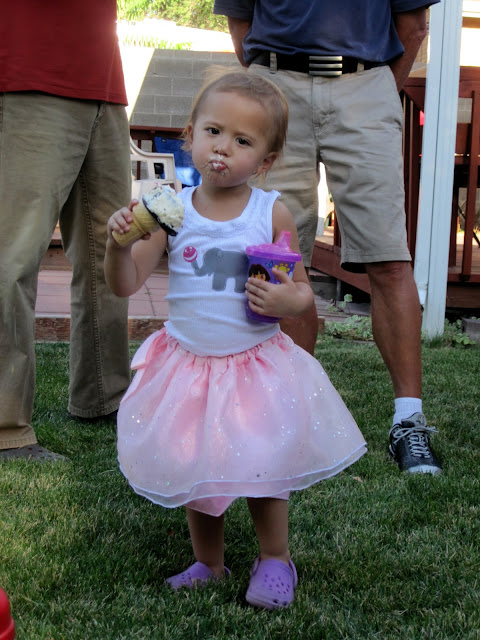 Once upon a time a little girl turned 2. She had a super fun party but then Halloween orders struck and I forgot all about the pictures until she was close to turning 3 yikes! So before L has another birthday party next weekend here’s a little of what we did last year, it was super cute and yummy. 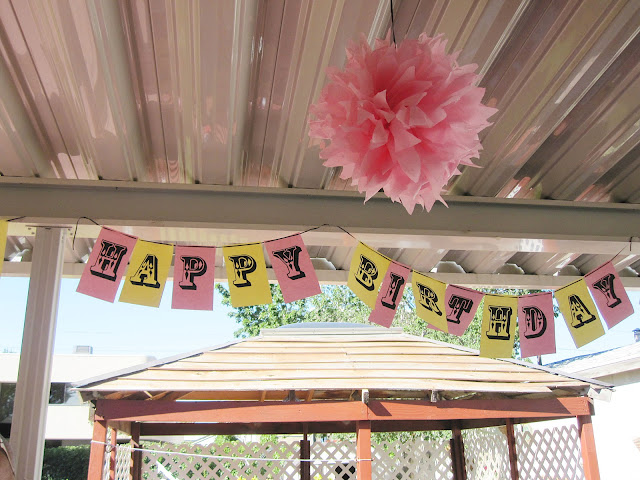 I made a fun birthday banner using a cool circus font that I found at 1001freefonts. My sister made all these really cool tissue paper pom poms and she hung them from her porch covering. It looked awesome. 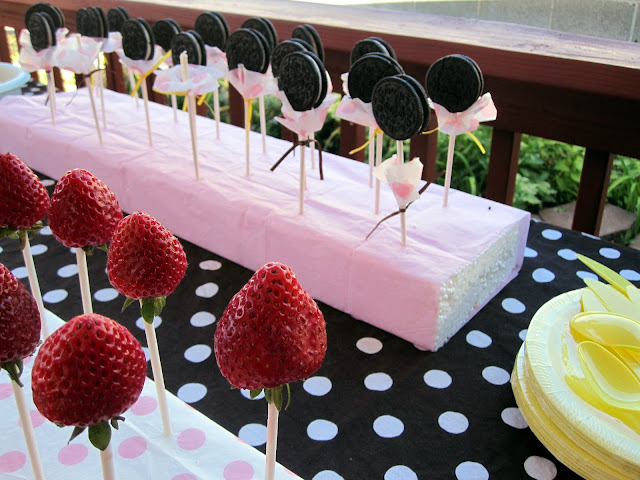 Who doesn’t love food on a stick. The strawberries were so cute and my mom and sister just did a little round of tissue paper and a bow for the double stuffed oreos. With just a little cute tissue paper over chucks of styrofoam a quick and easy little stand was made. And I was so impressed with the kiddos, the strawberries were polished off super fast. They also made chocolate covered marshmallows on lollipop sticks too but they were melting so they stayed in the kitchen. 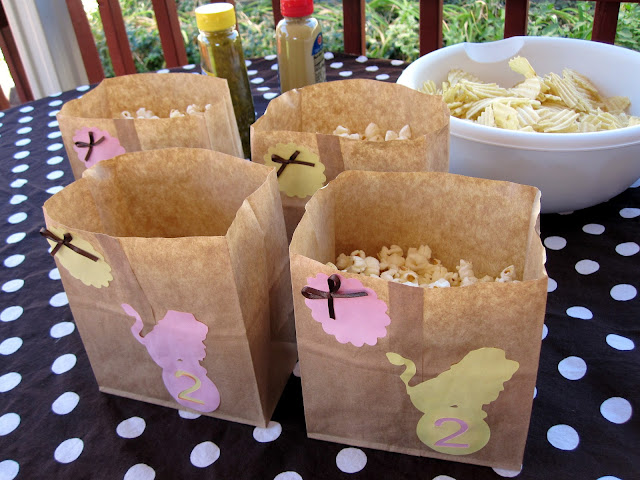 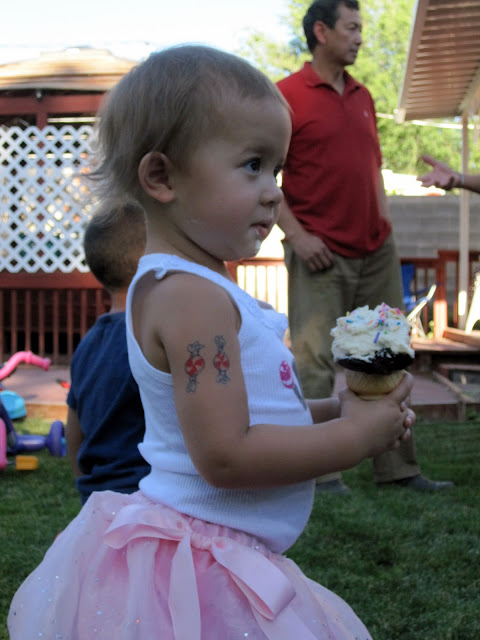 They made these stinking adorable “ice cream cone” cupakes. They were so cute. Cones with cake in it and frosting on top so they looked just like ice cream cones but they were really the biggest cup cakes you’ve ever seen (or ever given a bunch of preschoolers). Man she’s grown up so much in just one year! 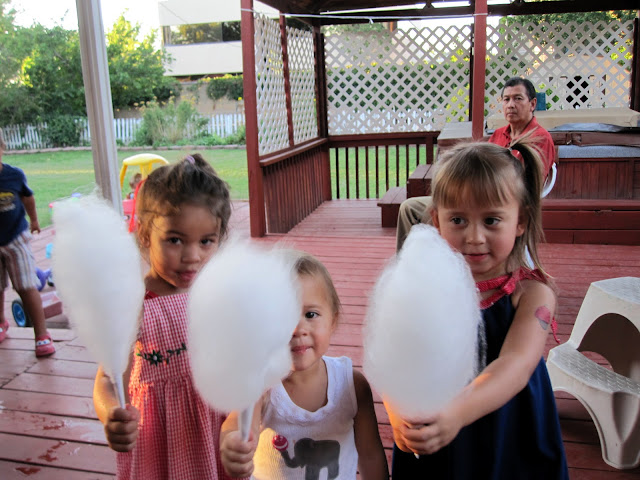 My mom pulled out the cotton candy maker that she’s had since we were little and it was a huge hit. We just rolled up some colored paper for the handles and the kids drooled over the spun sugar. 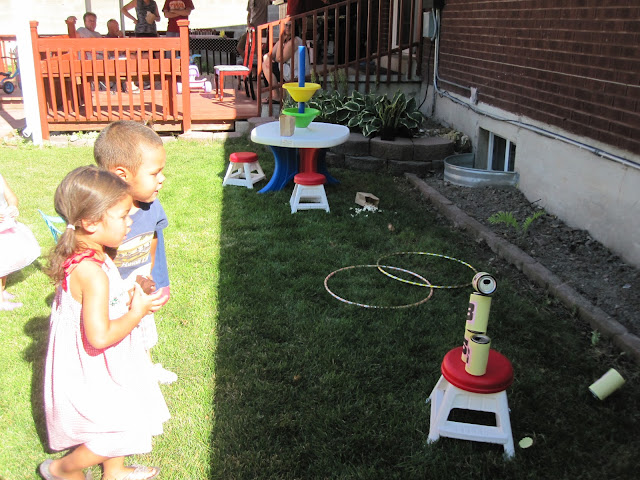 I made a few games. Soda cans covered with paper and numbers. The idea was to stack them and throw a bean bag to hit them down. I also made a bunch of bean bags with numbers and thought the kids could throw those into hulu hopes. They were still a little too young for these games (they were 2-3 at the time) but I think this year it would definitely work. 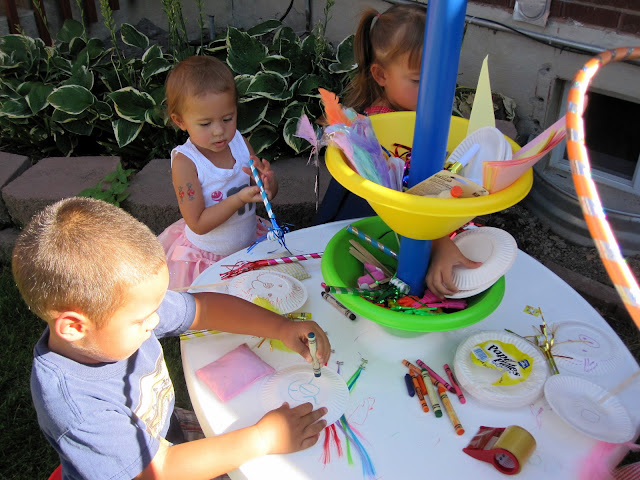 In addition to the games we set up a craft table where the kids could make masks out of paper plates, feathers and other goodies. This went way better than the games. Seriously I think crafts at birthday parties are awesome. 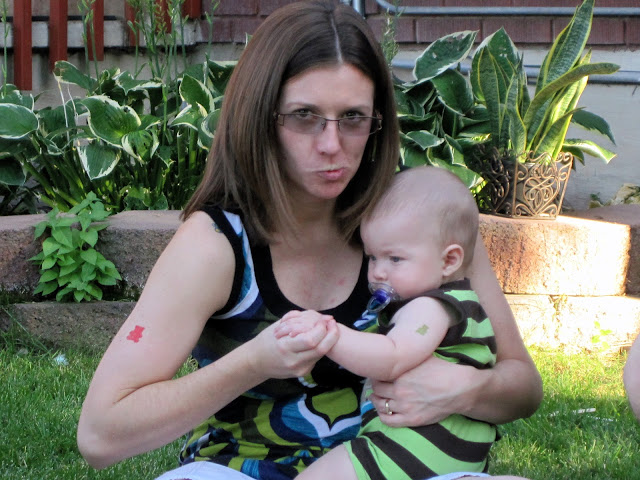 Of course there was good old running in the grass, presents opening and hanging out with good friends. And last but not least they gave everyone cute sweet inspired temporary tattoos. Look how little Langdon was! Now he’s got a new brother, holy cow how fast things change with little ones and just one year. 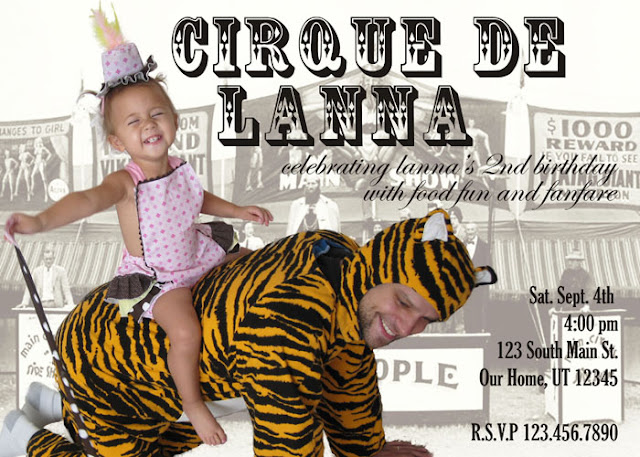 And just in case you weren’t around last year to see my masterpiece of an invite, here it is again.  Next up, princess strawberry party.