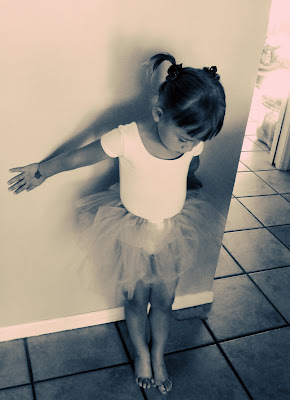 No T isn’t going to be a ballerina, this picture is just to set the seen. Picture T in her ballet class a couple weeks ago with all the other little girls going around the circle sharing what they are planning on being for Halloween . You can picture it right a lot of princess, fairies, ect.

When it gets to her she says “A bull”
The teacher leans closer and says “A what” after all she is 3 and sometimes it’s hard to understand what they say.
And with a look that says, are you dumb T says even louder “A bull”

Yes in all my evilness I thawted the naughty nieces dreams of being Sleeping Beauty and Cinderella and convinced them that it would be so awesome for them to be bulls and for uncle to be a matador and that they cold gore uncle which would be the most fun. I love making my husband dress up and play with them: evidence one L’s birthday invite.

To be fair, L already has a Cinderella dress that she wears almost every day and I told T if she’d be a bull I’d make her an Aurora dress for all the other days. But I think she’s forgotten about that and fully embraced her bull-ness they were SO excited when I finished their costumes last night. The matador has a few steps left for me to finish but I will share pics next week.