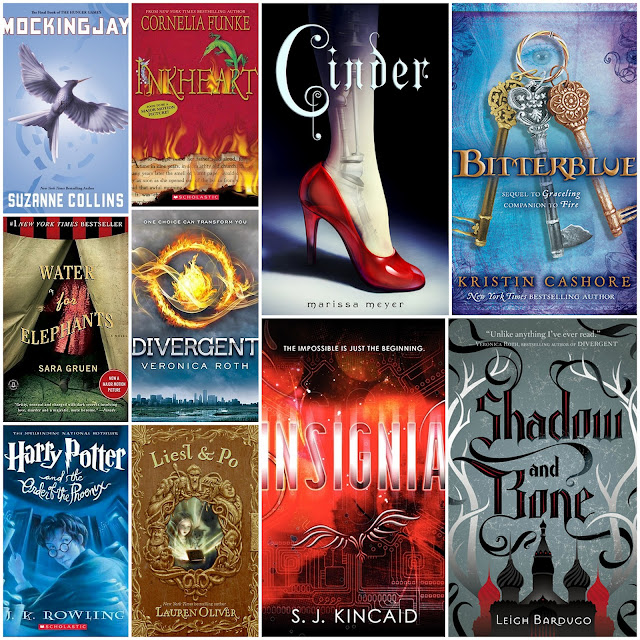 This weeks Top Ten Tuesday with The Broke and the Bookish is a rewind. Since I missed their villains week I thought it would be fun to do 10 books with villains I love to hate. Good villains and good stories go hand in hand. They set the stage for our heroes, drive the story, and often time challenge us. So here’s to 10 great heroes from some great YA reads. See everyone else’s posts here. And as always I love seeing what everyone else is reading so if you’re on goodreads let’s be friends!
Mockingjay (The Hunger Games, #3) by Collins, Suzanne – Oh just thinking President Snow and his nasty blood roses makes my skin crawl. What an amazing Villain.
Inkheart (Inkheart, #1) by Funke, Cornelia – This book was so fun and one of my favorite parts what the whole idea of what an author would do if he came face to face with the characters from his own stories, and not just characters but the worst of his villains. There are a few just awfully evil ones to choose from in Inkheart.
Cinder (Lunar Chronicles, #1) by Meyer, Marissa – The step mother totally had me yelling at the book. And yes we all know that the evil step mother in Cinderella is THE stereotype but seriously in this retelling of the classic tale I just hated the character.
Bitterblue (Graceling Realm, #3) by Cashore, Kristin – One of the creepiest, most evil and complicated characters I’ve ever experiences has got to be Leck. Bad Bad Bad
Water for Elephants by Gruen, Sara – August part deranged psycho part scary drunk. Definitely the type of bad guy to keep the story going.
Divergent (Divergent, #1) by Roth, Veronica – Oh Jeanine Matthews how I hate you! I can’t decide if I think she’s so delusionally utilitarian, insanely power hungry, or both. Either way she’s bad news.
Harry Potter and the Order of the Phoenix (Harry Potter, #5) by Rowling, J.K. – Of course I have a good amount of hate for He Who Must Not Be Named but Dolorous Umbridge she just makes me so mad. Her oblivion, her inane rules, her respect for the law for the sake of the law. She’s just awful.
Liesl and Po by Oliver, Lauren – Another evil step mother. She had my blood boiling with every single page she appeared on!
Insignia (Insignia, #1) by Kincaid, S.J.- This is in an interesting one to me. I adored Insignia as I’ve mentioned before it was such a fun read. But I loved the idea of the enemy being a powerful evil corporation. Yes there was a face to the corporation but the way I read it I took the evil to be a company wide policy not just of the one key player. And I thought that was interesting, clever, and realistically scary.

Shadow and Bone (The Grisha, #1) by Bardugo, Leigh – One of the best villains (and books actually) that I’ve read in a long time. He’s charming, he’s manipulative, he’s alluring and he’s pure evil!

Tutorial: Shrinky Dink Pendants (yes mine may be a Dauntless Train from Divergent)