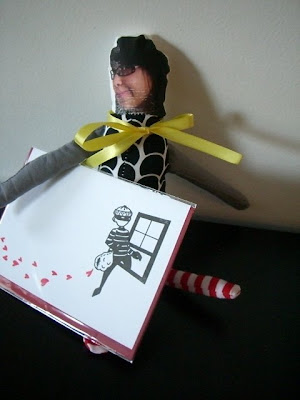 I know it’s way past but I’m a bit proud of the present I gave this year and I wanted to share it. Yes I made the music maker a creepy doll of me. I thought of it as I drifted off to sleep on Feb. 12th. Luckily I had already purchased this awesome card from PaperMichelle . So worst come to worst I was thinking of just giving the card. Well Friday was packed so I hurriedly threw the doll together and since the hubby now works from home I had to grab the few minutes he was out. It was really easy.

If you want to make your own creepy doll just…
1) print a picture (or drawing or whatever) onto iron on paper, iron it onto some fabric and cut two face shapes, one with the print and one just plain fabric (cut two layers at the same time so they are the same size.
2) decide on a shape for the body, cut two of that
3) cut two long thin things and then two more for arms and legs
4) with rights sides together sew the neck part together (so the head and the body front and back this should leave you with two pieces instead of four)
5) make the arms and legs by sewing 2 strips together (you’ll need 8 strips total) at the two long sides and one short side, flip it and then stuff it with batting or something soft.
6) pin the arms to the body with most of the arm on the inside and just a little on the edge, sew right sides together from the bum area around the head (making sure to sew over the arms).
7) flip this main thing right side out your arms should be pooking out. Now stuff it.
8) if you want to weight it which I did and didn’t turn out the best make a pouch and fill it with beans or rice throw it in the bottom of the body.
9) stick the stuffed legs in the bottom area, fold the bottom of the body and just stitch across catching the legs and sealing the creepy doll up.

I hope that made sense. It’s not supposed to be a pretty tailored doll if you didn’t already get that. It’s a fast sloppy weird thing. Oh and I received the BEST Valentine’s present fresh bread from Hopper’s without having to eat their subpar food. Daniel picked some up and just brought me home a huge loaf with whipped butter. It was so so delish.