Home » book geekery » What I’ve Been Reading: It’s Been Too Long! 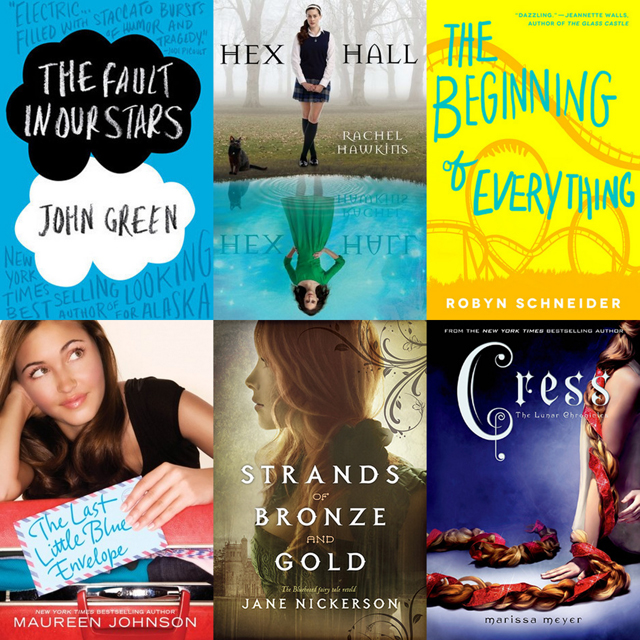 I’ve been trying to write this post for a MONTH yes you read that right a month! So I’m giving up. And going list style on you because I want to share the books that I’ve been reading and loving I really do and it’s just silly that it’s taking me so long. In related news, having a baby is freaking hard. So here’s a few of my favorites that I’ve read (or listened to in the past few months) my goodreads has some more of my thoughts on each of them and all the other books I’ve read. I wish I had the time and energy to write real reviews for all of these but I’ll just have to leave it at I liked these (and many of them I LOVED), if the synopsis sounds appealing to you I think you should pick it up and check it out!

The Fault in Our Stars (I finally got the guts up to read this. I wish I had read it sooner! Just as good as everyone says and not the depressing crazy tear jerker I was worried about, it’s actually very funny and awesome! Also movie comes out soon. The synopsis does not do this book justice just go read it.)

Despite the tumor-shrinking medical miracle that has bought her a few years, Hazel has never been anything but terminal, her final chapter inscribed upon diagnosis. But when a gorgeous plot twist named Augustus Waters suddenly appears at Cancer Kid Support Group, Hazel’s story is about to be completely rewritten.

Three years ago, Sophie Mercer discovered that she was a witch. It’s gotten her into a few scrapes. Her non-gifted mother has been as supportive as possible, consulting Sophie’s estranged father–an elusive European warlock–only when necessary. But when Sophie attracts too much human attention for a prom-night spell gone horribly wrong, it’s her dad who decides her punishment: exile to Hex Hall, an isolated reform school for wayward Prodigium, a.k.a. witches, faeries, and shapeshifters.

By the end of her first day among fellow freak-teens, Sophie has quite a scorecard: three powerful enemies who look like supermodels, a futile crush on a gorgeous warlock, a creepy tagalong ghost, and a new roommate who happens to be the most hated person and only vampire student on campus. Worse, Sophie soon learns that a mysterious predator has been attacking students, and her only friend is the number-one suspect.

As a series of blood-curdling mysteries starts to converge, Sophie prepares for the biggest threat of all: an ancient secret society determined to destroy all Prodigium, especially her.

The Beginning of Everything (Great contemporary, I really liked this, but it’s kind of hard to describe)

Golden boy Ezra Faulkner believes everyone has a tragedy waiting for them—a single encounter after which everything that really matters will happen. His particular tragedy waited until he was primed to lose it all: in one spectacular night, a reckless driver shatters Ezra’s knee, his athletic career, and his social life.

No longer a front-runner for Homecoming King, Ezra finds himself at the table of misfits, where he encounters new girl Cassidy Thorpe. Cassidy is unlike anyone Ezra’s ever met, achingly effortless, fiercely intelligent, and determined to bring Ezra along on her endless adventures.

But as Ezra dives into his new studies, new friendships, and new love, he learns that some people, like books, are easy to misread. And now he must consider: if one’s singular tragedy has already hit and everything after it has mattered quite a bit, what happens when more misfortune strikes?

The Last Little Blue Envelope (Sequel. I liked this even better than the first book)

Ginny Blackstone thought that the biggest adventure of her life was behind her. She spent last summer traveling around Europe, following the tasks her aunt Peg laid out in a series of letters before she died. When someone stole Ginny’s backpack—and the last little blue envelope inside—she resigned herself to never knowing how it was supposed to end.

Months later, a mysterious boy contacts Ginny from London, saying he’s found her bag. Finally, Ginny can finish what she started. But instead of ending her journey, the last letter starts a new adventure—one filled with old friends, new loves, and once-in-a-lifetime experiences. Ginny finds she must hold on to her wits . . . and her heart. This time, there are no instructions.

Strands of Bronze and Gold (Bizarrely good and addictive. Kind of disturbing but I couldn’t stop reading.)

When seventeen-year-old Sophia Petheram’s beloved father dies, she receives an unexpected letter. An invitation—on fine ivory paper, in bold black handwriting—from the mysterious Monsieur Bernard de Cressac, her godfather. With no money and fewer options, Sophie accepts, leaving her humble childhood home for the astonishingly lavish Wyndriven Abbey, in the heart of Mississippi.

Sophie has always longed for a comfortable life, and she finds herself both attracted to and shocked by the charm and easy manners of her overgenerous guardian. But as she begins to piece together the mystery of his past, it’s as if, thread by thread, a silken net is tightening around her. And as she gathers stories and catches whispers of his former wives—all with hair as red as her own—in the forgotten corners of the abbey, Sophie knows she’s trapped in the passion and danger of de Cressac’s intoxicating world.

Glowing strands of romance, mystery, and suspense are woven into this breathtaking debut—a thrilling retelling of the “Bluebeard” fairy tale.

Cress (OH MY GOSH THIS WAS SO GOOD. This (The Lunar Chronicles) officially is one of my all time favorite series)

I’m not including the synopsis since it is a bit spoiler-y for books 1 and 2 but this is a great series of sci-fi and fantasy meets fairy tale. I was VERY skeptical when the first book came out but it blew me away. Just check them out!

Did Not Finish: Enclave, Antigoddess – I hate to say it but I’d skip these I don’t abandon books often, especially audiobooks, but I could not get into these.