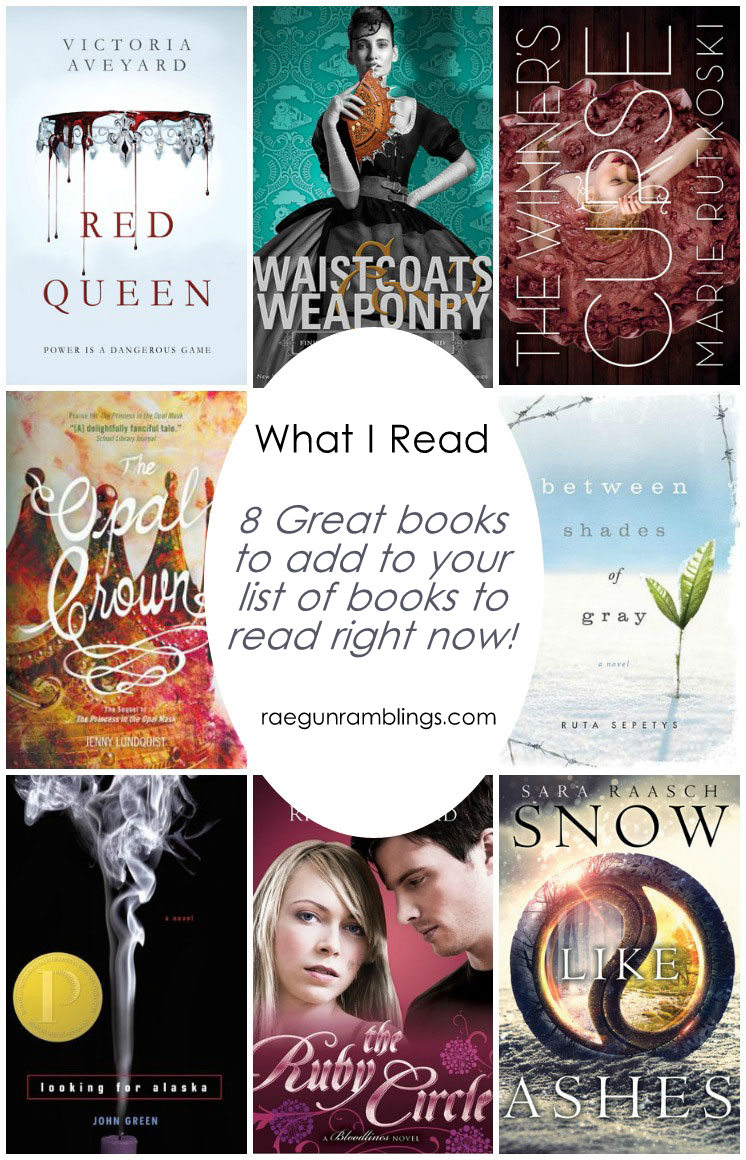 The weather has been GORGEOUS so I’ve been walking every day for Teddy’s nap. And where there is walking there is audiobook listening. I have listened and read so many great books lately I’m really excited to share them with you. It’s a good mix of books that I just hadn’t gotten around to and new releases. Here are the most notable of the bunch! You can see a complete list of the books I’ve read on my goodreads.

If you like warrior girls, light fantasy, and lots of adventure you will really enjoy this! I loved the audiobook and found myself actually exercising longer and doing household tasks I had put off just so I could listen longer. Fans of Graceling and Girl of Fire and Thorns should check this out.

A heartbroken girl. A fierce warrior. A hero in the making.Sixteen years ago the Kingdom of Winter was conquered and its citizens enslaved, leaving them without magic or a monarch. Now, the Winterians’ only hope for freedom is the eight survivors who managed to escape, and who have been waiting for the opportunity to steal back Winter’s magic and rebuild the kingdom ever since.Orphaned as an infant during Winter’s defeat, Meira has lived her whole life as a refugee, raised by the Winterians’ general, Sir. Training to be a warrior—and desperately in love with her best friend, and future king, Mather — she would do anything to help her kingdom rise to power again.So when scouts discover the location of the ancient locket that can restore Winter’s magic, Meira decides to go after it herself. Finally, she’s scaling towers, fighting enemy soldiers, and serving her kingdom just as she’s always dreamed she would. But the mission doesn’t go as planned, and Meira soon finds herself thrust into a world of evil magic and dangerous politics – and ultimately comes to realize that her destiny is not, never has been, her own.

This book is jammed packed full of things that I love: dystopian (albeit light fantasy) setting, kids with powers, classic rags to riches/fairy tales, fighting and training, political intrigue, and of course romance. It makes it on one hand a bit predictable but hey I know what I like and when you put all the things I like together I’m happy. I listened to the audiobook which was great. Liked the Hunger Games, Super Heroes, and castle life stories? Then this is the book for you.

The poverty stricken Reds are commoners, living under the rule of the Silvers, elite warriors with god-like powers.To Mare Barrow, a 17-year-old Red girl from The Stilts, it looks like nothing will ever change.Mare finds herself working in the Silver Palace, at the centre ofthose she hates the most. She quickly discovers that, despite her red blood, she possesses a deadly power of her own. One that threatens to destroy Silver control.But power is a dangerous game. And in this world divided by blood, who will win?

Between Shades of Gray by Ruta Sepetys

This is not my standard genre although I do enjoy most historical fiction when I read it. I picked this up not knowing a single thing about it. Like nothing nothing. I just knew SO many people said it was amazing. And it was but it is also a Stalin era book (so like Holocaust but Stalin). You spend a lot of time in prison/labor camps. There is some rough stuff but this book is in no way a downer. People do die (as MANY did in the real thing) but it’s a beautiful story and the characters are great. Plus I believe it’s a part of history that we should be better educated about. Push yourself and pick this up!

Lina is just like any other fifteen-year-old Lithuanian girl in 1941. She paints, she draws, she gets crushes on boys. Until one night when Soviet officers barge into her home, tearing her family from the comfortable life they’ve known. Separated from her father, forced onto a crowded and dirty train car, Lina, her mother, and her young brother slowly make their way north, crossing the Arctic Circle, to a work camp in the coldest reaches of Siberia. Here they are forced, under Stalin’s orders, to dig for beets and fight for their lives under the cruelest of conditions.Lina finds solace in her art, meticulously–and at great risk–documenting events by drawing, hoping these messages will make their way to her father’s prison camp to let him know they are still alive. It is a long and harrowing journey, spanning years and covering 6,500 miles, but it is through incredible strength, love, and hope that Lina ultimately survives.Between Shades of Gray is a novel that will steal your breath and capture your heart.

The Winner’s Curse by Marie Rutkowski

There was a lot of hype about this book and I can see why. It’s a very interesting and unique story. I found it to be unpredictable which is not very common in most YA books I read. If you like a good cross socioeconomic friendships with interesting political maneuvering this is a good one. Lots of twists and turns. I listened to the audiobook which features a number of “accents” I’m still not 100% what I thought about that but I’m leaning towards kind of liking it. If you liked For the Darkness Shows the Stars or The Seven Realms books I can see you really enjoying this.

As a general’s daughter in a vast empire that revels in war and enslaves those it conquers, seventeen-year-old Kestrel has two choices: she can join the military or get married. But Kestrel has other intentions. One day, she is startled to find a kindred spirit in a young slave up for auction. Arin’s eyes seem to defy everything and everyone. Following her instinct, Kestrel buys him—with unexpected consequences. It’s not long before she has to hide her growing love for Arin. But he, too, has a secret, and Kestrel quickly learns that the price she paid for a fellow human is much higher than she ever could have imagined. Set in a richly imagined new world, The Winner’s Curse by Marie Rutkoski is a story of deadly games where everything is at stake, and the gamble is whether you will keep your head or lose your heart.

Looking for Alaska by John Green

Oh I go back and forth on this. I mean I liked it for sure but there is something to say about a book that I find just okay until the very end. Yes it all comes together, yes I enjoyed the whole book but I found myself thinking “what’s the hype” until the end. So this is more like a 3.5 maybe 3.7 but good. I’m glad I read it. Very memorable characters, friendships, coming of age sorts of things, and some good life lessons that would be awesome to learn in a book and not 1st hand. I’ve never read The Perks of Being a Wallflower but based on my watching of the movie I can see people who liked that loving this.

Before. Miles “Pudge” Halter’s whole existence has been one big nonevent, and his obsession with famous last words has only made him crave the “Great Perhaps” (François Rabelais, poet) even more. He heads off to the sometimes crazy, possibly unstable, and anything-but-boring world of Culver Creek Boarding School, and his life becomes the opposite of safe. Because down the hall is Alaska Young. The gorgeous, clever, funny, sexy, self-destructive, screwed-up, and utterly fascinating Alaska Young, who is an event unto herself. She pulls Pudge into her world, launches him into the Great Perhaps, and steals his heart.

After. Nothing is ever the same.

The following are sequels so I won’t include the synopses since I don’t want to spoil anything thing for those of you who haven’t started these series yet!

All the feels you guys all the feels! But really if you’ve read the first two books and liked them drop everything and grab yourself a copy because this is SOOOOO good. If you haven’t started this series it’s WAY cute. It’s about a group of girls that are in a finishing school that’s really a front for spy training. And it’s all stem punked out. The characters are so charming and loveable. But weirdly enough I could not get through Etiquette and Espionage when I tried reading it (twice) luckily I decided to give the audiobooks a try and loved it. These books are a must listen. Think of it as a combo of The Sweetness at the Bottom of the Pie and The Infernal Devices series.

The Opal Crown (The Opal Mask #2) by Jenny Lundquist

LOVE THIS BOOK. LOVE THIS SERIES. I hope deep in my heart that she does a spin off series within this world because I loved them so so so so so much. If you haven’t read The Princess in the Opal Mask it’s so original and unique I can’t gush enough you just need to read it. This is the perfect sequel. If you liked The False Prince books, The Books of Bayern, or His Fair Assassin series (although this is very different) I think you will adore The Opal Mask books.

Let me just say that Mead KNOWS how to do endings right!!! This is the perfect end to an amazing series. It all started in the Vampire Academy books and continued in these Bloodline books and I adore them. Love the characters and the adventure and the world and the sass! If you haven’t started Vampire Academy you’re just being plain silly. These books are some of my favorites and I really don’t like vampires. The name of the series is atrocious but trust me the books are really great. If you liked Harry Potter (those this is probably for older kids) and The Mortal Instruments you need to read these. 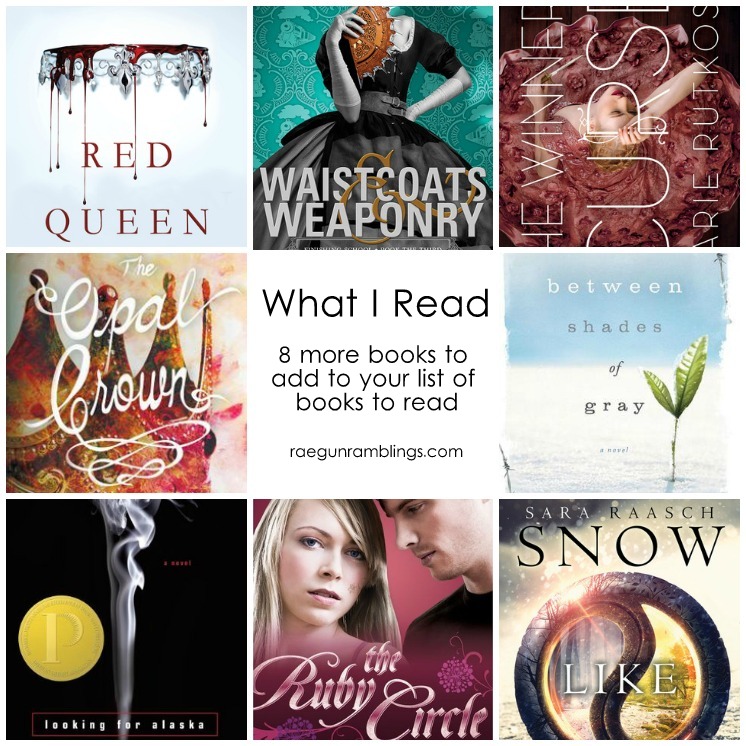 So what have you been reading? I honestly want to know! Feel free to tell me in the comments.

If you’ve blogged about it feel free to leave a link to a recent book review or reading recap. And don’t forget that every week on Instagram and Facebook I do a a reading roll call. I’d love you to follow and join in!