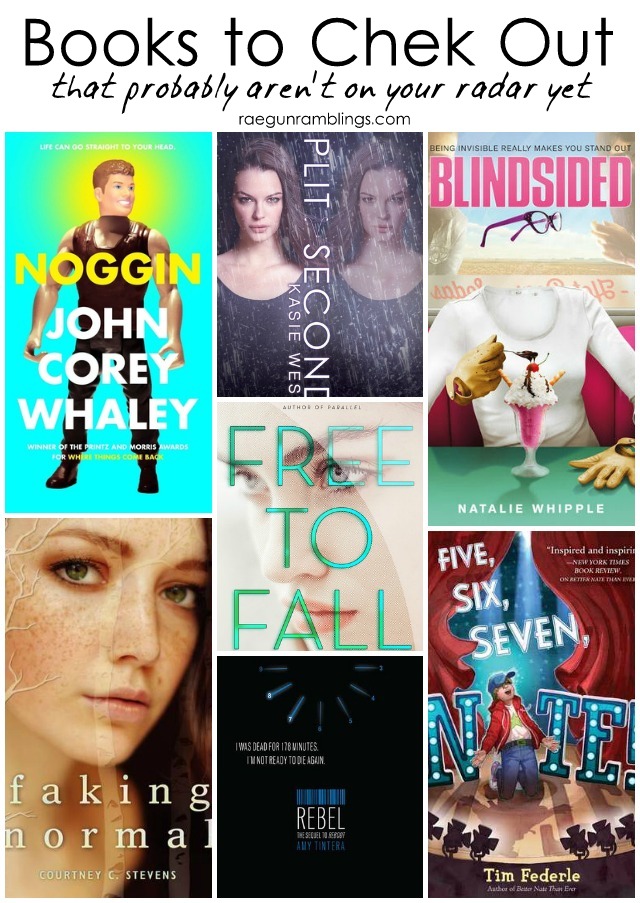 Noggin – Travis was dying, his body was ravaged and he decided to have his head cryogenically frozen at 16 assuming once they figured out how to bring him back it would be way in the future. But, science advances a little faster than he expected and he finds himself away and attached to someone else’s body only 5 years later. This book was so interesting and fun. It has a super sci-fi premise but when it comes down to it, it really is more of a figuring out who you are type of story jam packed full of humor. I definitely recommend it and if you get the chance be sure to check out the audiobook!

Listen — Travis Coates was alive once and then he wasn’t.Now he’s alive again.Simple as that.The in between part is still a little fuzzy, but he can tell you that, at some point or another, his head got chopped off and shoved into a freezer in Denver, Colorado. Five years later, it was reattached to some other guy’s body, and well, here he is. Despite all logic, he’s still 16 and everything and everyone around him has changed. That includes his bedroom, his parents, his best friend, and his girlfriend. Or maybe she’s not his girlfriend anymore? That’s a bit fuzzy too.Looks like if the new Travis and the old Travis are ever going to find a way to exist together, then there are going to be a few more scars.Oh well, you only live twice.

Faking Normal – This was a tough story.  In fact I was a bit undecided about it most of the way through. But that being said I was hooked. I just kept listening and listening. There are broken people who have experienced some serious wrongs. This is still YA so while there are hard issues it’s not a downer but be prepared to deal with some characters with intense baggage.

Alexi Littrell hasn’t told anyone what happened to her over the summer. Ashamed and embarrassed, she hides in her closet and compulsively scratches the back of her neck, trying to make the outside hurt more than the inside does.When Bodee Lennox, the quiet and awkward boy next door, comes to live with the Littrells, Alexi discovers an unlikely friend in “the Kool-Aid Kid,” who has secrets of his own. As they lean on each other for support, Alexi gives him the strength to deal with his past, and Bodee helps her find the courage to finally face the truth.

Free to Fall – I have become a huge Lauren Miller fan. One again she kills it with a super interesting, philosophically rich story that is totally accessible for teens making the read fast and pleasant. This time it’s all about decision making and how much control is too much to hand over to electronic devices. Sure it’s a pretty heady premise but she’s such a great story teller that it doesn’t feel like work it’s just a fun story full of mysteries, a cute boy, an elite high school, a secret society, and major conspiracy. I flew through this. If you liked her first book Parallel (one of my all time favorite reads) you should check this out.

What if there was an app that told you what song to listen to, what coffee to order, who to date, even what to do with your life—an app that could ensure your complete and utter happiness?

What if you never had to fail or make a wrong choice?

What if you never had to fall?

Rebel – The sequel to Reboot which I think might be even better than the first book! It’s a spin on zombies which is fresh and fun (and I’m not a zombie person at all). It’s just the right balance of action and romance and I love that they didn’t force it into a trilogy since the two books perfectly get the story across.

Five years ago, Wren Connolly was shot three times in the chest. After 178 minutes she came back as a Reboot: stronger, faster, able to heal, and less emotional. The longer Reboots are dead, the less human they are when they return. Wren 178 is the deadliest Reboot in the Republic of Texas. Now seventeen years old, she serves as a soldier for HARC (Human Advancement and Repopulation Corporation).Wren’s favorite part of the job is training new Reboots, but her latest newbie is the worst she’s ever seen. As a 22, Callum Reyes is practically human. His reflexes are too slow, he’s always asking questions, and his ever-present smile is freaking her out. Yet there’s something about him she can’t ignore. When Callum refuses to follow an order, Wren is given one last chance to get him in line—or she’ll have to eliminate him. Wren has never disobeyed before and knows if she does, she’ll be eliminated, too. But she has also never felt as alive as she does around Callum.The perfect soldier is done taking orders.

Blindsided – The sequel to Transparent. The story get more complicated and interesting and awesome. If you loved the world of Transparent where everyone has powers, mob syndicates run the world in fear, and the teens are figuring fighting back you should check this out. Reading the rest of Fiona and the gangs story is a must. Haven’t read Transparent yet? It was one of my favorites from last year.

Plenty of teenagers feel invisible. Fiona McClean actually is.An invisible girl is a priceless weapon. Fiona’s own father has been forcing her to do his dirty work for years—everything from spying on people to stealing cars to breaking into bank vaults.After sixteen years, Fiona’s had enough. She and her mother flee to a small town, and for the first time in her life, Fiona feels like a normal life is within reach. But Fiona’s father isn’t giving up that easily.Of course, he should know better than anyone: never underestimate an invisible girl.

Split Second – Pivot Point was one of the books the BLEW ME AWAY last year. I’m sure it will stay a favorite for a very long time. I was so looking forward to this sequel and it did not disappoint. Kids with powers, issues of time and alternate realities, and a very cute boy. This may be my favorite book I’ve read this year. It’s such a unique story and so well told you’ll be flying throw it.

Knowing the outcome doesn’t always make a choice easier . . .Addison Coleman’s life is one big “What if?” As a Searcher, whenever Addie is faced with a choice, she can look into the future and see both outcomes. It’s the ultimate insurance plan against disaster. Or so she thought. When Addie’s parents ambush her with the news of their divorce, she has to pick who she wants to live with—her father, who is leaving the paranormal compound to live among the “Norms,” or her mother, who is staying in the life Addie has always known. Addie loves her life just as it is, so her answer should be easy. One Search six weeks into the future proves it’s not.In one potential future, Addie is adjusting to life outside the Compound as the new girl in a Norm high school where she meets Trevor, a cute, sensitive artist who understands her. In the other path, Addie is being pursued by the hottest guy in school—but she never wanted to be a quarterback’s girlfriend. When Addie’s father is asked to consult on a murder in the Compound, she’s unwittingly drawn into a dangerous game that threatens everything she holds dear. With love and loss in both lives, it all comes down to which reality she’s willing to live through . . . and who she can’t live without.

Five, Six, Seven, Nate! – Nate is back and this time living out his dream to be on Broadway. The story is very cute and if you liked the musical loving boy Nate from Better Nate than Ever and his innocent hilarious ways you should check this out.

(Better Nate than Ever synopsis since I don’t want to post the Five, Six, Seven, Nate! one which might spoil things for those of you who haven’t read book 1 yet)

Nate Foster has big dreams. His whole life, he’s wanted to star in a Broadway show. (Heck, he’d settle for *seeing* a Broadway show.) But how is Nate supposed to make his dreams come true when he’s stuck in Jankburg, Pennsylvania, where no one (except his best pal Libby) appreciates a good show tune? With Libby’s help, Nate plans a daring overnight escape to New York. There’s an open casting call for E.T.: The Musical, and Nate knows this could be the difference between small-town blues and big-time stardom.