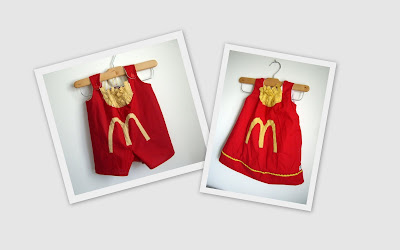 So they told me I need to stop using the “golden arches” in my costumes. The official letter from the lawyer came today. Booo. I’ll just make them without the “M”. And of course people are welcome to add their own golden arches to their fries costume at home since it’s a matter of selling things with their trademark. And I totally understand it’s their right and I won’t sell anymore with the arches I just think it’s kinda of sad.

What’s even more annoying is that we, that is the music maker and I have some copyright history with McDonald’s. You know the Badabababa tune that they’ve been using in ALL their commercials for these past many years. Well maybe a year or two before their first commercial featuring that tune aired my hubby released an album (a real national release with a record label, not just a local thing) with the exact same tune. Errr. So here we are already feeling like they’ve stolen from us and they can’t just shrug off a dinky business like mine making cute costumes that gives them free advertising. Lame. And it’s not like we could really go after them about the song stuff since the copyright belongs to the record label who we know weren’t compensated for the theft. Yup.

Don’t believe me. Let’s compare. While they’ve morphed the tune recently a tad style-wise (which doesn’t matter for copyright reasons), the original was disturbingly similar. But of course I can’t find any recent McDonald’s commercial’s on YouTube, but really who hasn’t heard it? I just wish I could show you the original version because it’s almost identical. It’s not just a matter of notes, but style and music and the whole bit of the original commercial.

So there you go as much as I love their fries and nuggets the business part of McDonald’s is some of the lamest on earth for their lovely double standard.