So after my emo post last week I got to thinking and after talking it through with my trainer Cody I was totally convinced that I MUST be missing some stuff in my food log. After all when it comes down to with the type of plateau that people worry about just can’t happen when you’re burning less than you’re eating. If you just keep walking at the same pace your body becomes more efficient in burning it true. But if you feel as worn out at the end and are creating a caloric deficit math is math so I must not have logged right. And I had ADDED cardio.

Yes it’s always good to change this up, but my whole plan is built around changes already. I just think that appealing to the ominous plateau was not being honest with my eating somewhere along the line. And to be honest I strongly believe that plateaus are rare if people are really eating less and pushing themselves as hard as when they started (which may require going faster or harder as they continue).

I did decide that maybe I wasn’t pushing as hard as I should also so I made sure to push harder on my cardio doing some walking as well as biking since it’s easy to be lazy on the bike. But the biggest thing was that I tried to log my food immediately after I ate so I wouldn’t forget anything. And I realized that there were a few small, but still existent, things that I’m sure I probably would have forgotten every day if I had waited until before bed to log like I had been doing. And I hadn’t been getting every day logged before. Not just that but I think knowing the current state of my calories so accurately instead of my estimation in my head helped me make better choices.

Any ways I’m happy to say I’m down  (and I’m even on an ahem typically hormonally higher week which is confirmed with the fact that I was at 146 two days ago). The next two weeks I’m on vacation and the goal is to enjoy the food around me but not to gain! 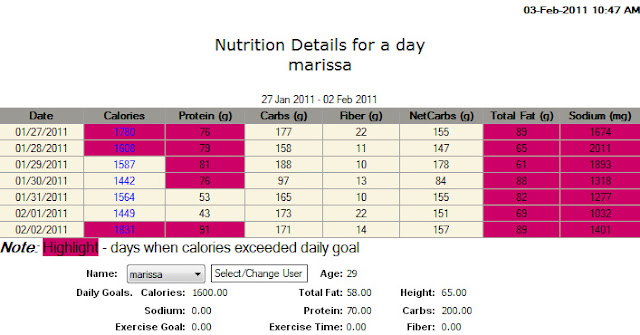