I got some bad news last week. I finally went into the doctor to figure out what was going on to my ankle. I went to a sports doc and I loved him, he was so thorough patient and seemed really knowledgeable and competent. But after about 7 X-rays of every possible angle of my ankle he had bad news for me. Apparently an old ‘sprain’ had actually been a break and the way it healed is uneven so that means I have trauma induced arthritis in my ankle which apparently is pretty uncommon. More than that I have bone spurs (probably from my many sprains) that can aggravate my ankle. And the kicker is that the arthritis part means that if I run at all, like ever in my entire life I will just break down my ankle. My doc said he was told something similar about his hip but he loves running so much that he is just going to keep running but know that he will need a hip replacement. Then he told me there is no equivalent for the ankle so I really need to stop running altogether. Apparently in his 5 years at the practice he’s only seen this 3 times so it’s extremely rare.

I was really surprised, I really thought I was going to hear that I either had a break or sprain, not that I could never run again. As I sat there kinda in shock I was almost crying and then I was in shock again that I had become the type of person that would even cry about not being able to run again. It’s still bizarre to me. But I love running when the whether was cold, I’d wanted to be one of those moms that actually used a jog stroller and I was hoping to someday do a triathalon. sigh.

I think though I’m really blessed that I had started training with my swim coach because I do love swimming the best and if I had gotten this news without realizing how good of a workout swimming can be and how good I actually am at swimming I think it would have been a lot harder. I’m still pretty bummed but I’ll deal right. Despite all of that I’m still down a smidge. So I feel good that I can still get this extra weight off of me. It’s good to know what was going on you know. 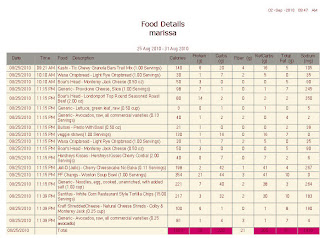 (the chart is my food log, yup every little thing I put in my mouth. If you click on it it’ll get bigger, you can click on it twice to make it legible)