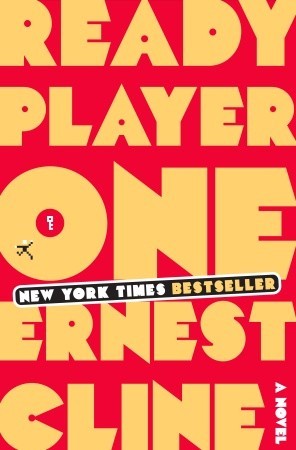 I figured with all the girly talk about The Hunger Games we should hear from a boy since after all there are plenty of boy fans of the trilogy. Today my friend Mark who has done music stuff with my hubby forever (currently Rotten Musicians and Mark Dago), writes for Big Shiny Robot (dagobot), and is one of my favorite people to talk books with is sharing his top 3 picks for fans of The Hunger Games. He also happens to be the person to get me to read the trilogy so technically the last 3 weeks of insanity on this blog can be blamed on him. So without further delay here’s Mark.

My taste in books, specifically, ‘YA” might differ than most who read this genre. Let’s just say, my suggestions will have less mushy-mushy love triangle soap fodder and more metaphysical/paranormal/esoteric elements. Also, as a bonus…all of these books have been optioned to be made into major motion pictures (Like the Hunger Games).
Ready Player One – Overflowing with geektastic throwbacks to 80’s pop culture culture (movies, music and of course…video games) this hard to put down novel faces the protagonist against powerful villains to overcome insurmountable obstacles to find his destiny. While that might sound like every other ‘YA’ plot or premise, Ernest Cline sticks in enough WTF moments throughout that transforms it into nostalgic zeitgeist. At times I felt as if this book had been written just for me.

Boneshaker– A novel that is an amalgam of steampunk, zombies and the Wild West (circa 1890’s.) It’s a fast, engaging read with a satisfying reveal at the end. The characters were interesting…f not all the way fleshed out. Cherie Priest paints a fantastical view of ‘Blight’ infected Seattle and the residents that inhabit it. Good escapist, action, Sci Fi.

Miss Peregrine’s Home for Peculiar Children– A coming of age tale within a very unique dark fantasy. Also, placed through out the book there are odd, old photographs that add to the storyline and plot. Ransom Riggs is a lucid and lyrical storyteller and here he creates a riveting and eccentric, supernatural mystery that will surprise at every turn. I might like this books ambition more than it’s execution. Still, I’ve never read anything quite like it.

« Link Party: What We Wore and Made Wednesdays #19 and Cents of Style Giveaway
Guest Post: Burlap Banner Tutorial with Newlyweds on a Budget »