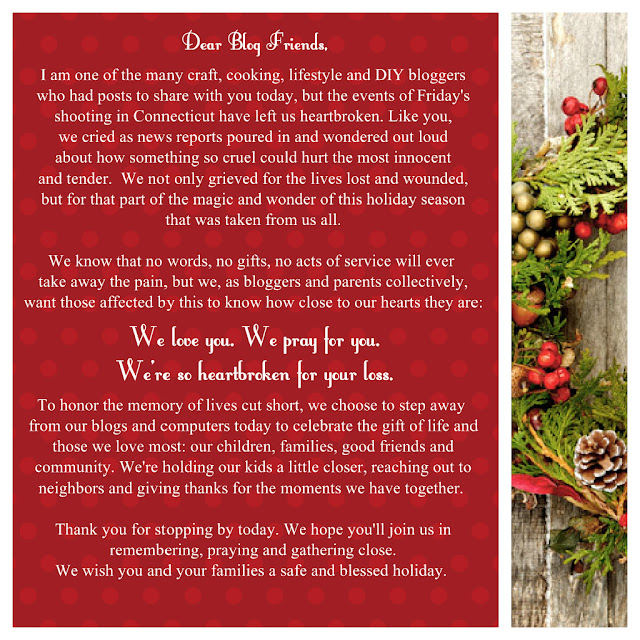 I mentioned on Friday how I was nervous to turn on the TV and I still haven’t and have no intentions to do so. I’ve seen some news stories on the web, heard it on the radio, and of course all over social media but these kind of things hit me really hard plus I’ve really been thinking about the role the media plays in making these kinds of actions appealing.
I am so sad for everyone involved, there are just no words to express how grateful I am to have my sweet crazy nieces still to hug and how unfair it is that others are missing their friends and family.
We had our own shooting in Utah a few years ago. The gunman, once again a young troubled man, shot up a shopping mall that we frequent. The horror only ended when a good person who had a gun stepped in to protect others. Until that point in my life I had been very wary about guns. And yes I agree that regulations (as well as mental health services) should be looked at but I strongly believe that bad people will always find a way to get guns and I am sure happy that a good person had a gun in the case of the Trolley Square shootings because it would have been much much worse. And I don’t mean this to be a debate, I don’t want it to be and I will moderate comments on this but among all this ban guns talk I thought I’d share another perspective from someone who does not own a gun, has never shot, nor had a desire to shoot a gun, but had her eyes open when one person did some terrible things and another was able to stop him because he also had a gun.
Updated: I wanted to add that I struggled with whether or not I wanted to join in with this day of silence (and I know my post isn’t quite silent anyways) because people DO grieve differently and I did not want people to feel pressured to participate or judged if they didn’t join in, but I loved the words written in the image and wanted to share them. Thanks to Stacy of Not Just a Housewife for putting the perspective that I felt into words that I couldn’t.