Okay you guys know I’m a huge fan of all things Harry Potter (proof) so when my husband gave me a vacation which included a trip to Universal Studios to visit The Wizarding World of Harry Potter I was first so freaking excited and so nervous I was going to be let down. It’s going to be a long post, sorry in advance to any Potter haters.

Let me tell you now. I was NOT let down. We both keep on saying how awesome it is just when you walk up to the gates of that section of the park. As humungo fans it was visually amazing, overwhelming, and more wonderful than either of us could imagine.

If you’re planning on going you should know that we endured a timeshare presentation to get free tickets. These tickets were a 87$ value. For that price you get into Universal’s Island of Adventure and the Potter stuff is part of that. We found out the hard way that Universal split the park in half when they opened Potterland so it literally felt like half an amusment park. It was MUCH MUCH smaller than Disneyland in Anaheim or Magic Mountain in Valencia (like maybe a third of the size?).

That being said besides the Potter stuff the park was pretty lame. There wasn’t much, just a handful of rides and some shops. We got there at 12pm and were kinda tired of it by 4pm ummm yeah…for 87$ I’m not sure. I mean I’m so glad we went and it was amazing BUT I’m not sure if I’d have the same feelings if I’d paid almost 200$ for both of us you know. I’ve heard rumors that they may be expanding the Potter part, if that’s so it may be more worth it in the future.

Okay so besides that little bit of practicality, the Potter part was wonderful, and we had loads of fun just being there, slowly taking in every nook and cranny and of course taking tons of pictures.

The Wizarding World of Harry Potter consists of a bunch of buildings which you only see the exterior. There are a few that you can go into including Zonkos which is connected to Honeydukes the candy shop. The insides were okay I’ll post some pics on my flickr later today. 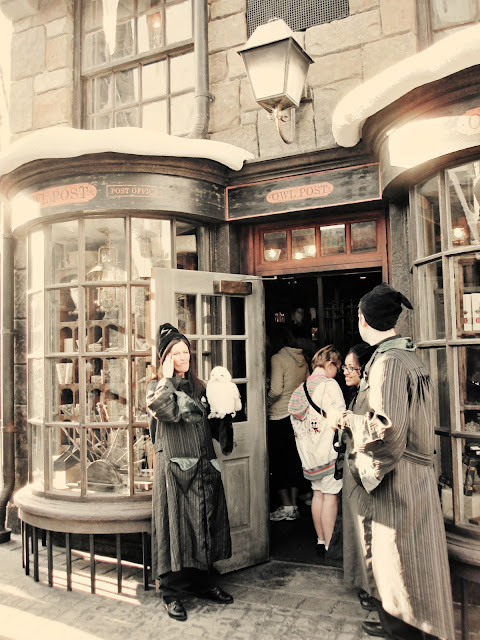 The Owlry is just a store with stuff like shirts, robes and other fan things. If you buy post cards you can get then stamped with a Hogwarts stamp right outside the door. You can go into Ollivander’s to look around or choose a wand (we just looked around).

You can take a picture by the Hogwarts Express, sometimes the conductor is there too. Oh something really cool is that they have free lockers that you can stash bags when you go on rides that you’re not allowed to carry anything with you. This was great for us since we had a backpack full of food.

There is a ‘restaurant’ and bar that is just a dark room with wood tables that’s supposed to be The Three Broomsticks. None of the food was appealing (of course it was over priced park food) and it was kinda of cold. I WISH that they had the school banquet room as a cafeteria style eatery but no.

The rides include The Flight of the Hippogriff. This is a mild coaster. I liked it a lot it reminded me of Goldrusher at Disney. It’s short and you get to see Buckbeak, over look the whole park, and see the outside of Hagrid’s hut.

The tour of Hogwart’s ride (Harry Potter and the Forbidden Journey) is the main ride and it is weird. It feels like you’re in a hanging coaster seat but I didn’t get how it moved. It was part simulator because there were a lot of movie screens that would play clips (made for the ride, not from the movie) and you kinda went through traditional ride stuff (you know structures sticking out at you) but it also had various screens with simulator stuff. You tilted turned and the screens made you feel like you were flying. It was cool but dizzying. Daniel actually felt really crappy afterward (and we’d taken motion sickness pills earlier in the day). The details were cool, the line to get to the ride was really cool (sorry no pics of that my battery died in line and of course the spare battery was in the bag in the locker). I’m just not sure I was into the type/style of the ride.

The other ride is the Dueling Dragons which I believe was an existing ride that they just adapted, kinda, to fit the theme. It was actually a really fun hanging roller coaster. Daniel and I both liked it (this one didn’t make him feel weird at all).

They have butter beer carts. I wasn’t sure I’d like it because I hate rootbeer and I assumed I didn’t like creme soda but Daniel got a frozen butter beer and it tasted delish. To me it tasted like a yummy butterscotch frozen shake. Daniel described it to people as a combo of butterscotch and creme soda. It was really tasty.

They also have a couple shows. An acapella choir with cool frog bass things. They were cool and super cheesey in the way that acapella groups can get, if you know what I mean.They also had a short ‘dance’ thing with the Beaubaton girls and the Drumstrang boys from. Both were fun to watch. Oh yeah and there were tons of little kids running around wearing robes and holding wands. Totally melts my heart!

And awesomely Myrtle was in the bathroom…well her voice.

Okay was that long enough? This was the shortest I could force myself…seriously. So if you’re as crazy as me check out my flickr where I’ll be putting more pictures up. I still think they could have made it all so much bigger and included so much more. But what they did they did wonderfully. I hope they consider making another bigger stand alone Potter-only park…maybe more West ;) Anyways that’s a lot I know but let me know if you have any questions.

If you liked this be sure to check out all my fun Harry Potter related creations, parties, recipes and more!