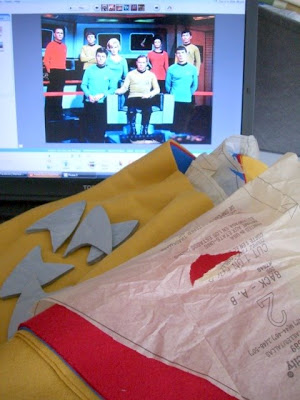 Yeah so we (Rotten Musicians) are doing a couple shows this weekend and one is sponsored by The Geek Show Podcast which to us means we need to totally geek out the set. I’m not sure why I thought this was a good idea but I thought it would be hysterical if we all showed up in Original star trek uniforms that I would just whip up. Remember this is the same bunch that did the Dungeons and Dragons video. Yeah what was I thinking? Anyways they’re 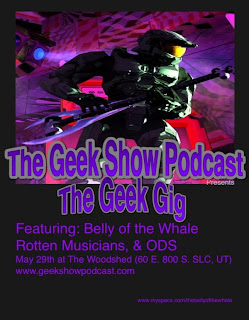 going to be a quick and dirty job for sure and we’re doing them out of this thickish knit (it’s the only stuff the right colors we could find) so it might be a little toasty and I am not the best at sewing on knit so it may be a disaster but it should still be funny.

Anyways I’ve got tons to do before I get to the uniforms but I did want to invite anyone in the Salt Lake area to stop by. It’s at the Woodshed which is 60 E. 800 S. We should go on around 9:30 or 10:00 ish but it’s a show so who knows how accurate that is. And it’s only 5$. Yup. It would be fun to see some of you there. I’ll try to take a picture of the whole crew for the rest of you.