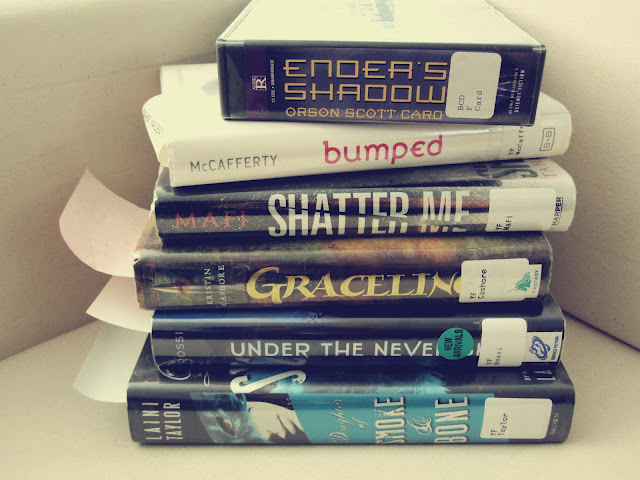 As always seems to be the case a boat load of books came off the library hold for me right at the same time. that and two days later the lovely Insurgent ARC was dropped in my lap. Needless to say I’ve been reading a bunch. I’m just going to highlight a few but if you want to see all of what I’ve read and my thoughts on each of them check out my goodreads account (I update it many times a week). Also I’d love to be friends if you’ve got an account.

Graceling by Kristin Cashore: I’m absolutely in love. I adore the writing style, characters, and story. Great strong female characters and unlike most YA books the characters seem kind of adult (even though they are supposed to be young) and there are little kids in the books which was fun. I’m in the middle of book two in the series and I adore it. I recommend the audio versions.

Vampire Academy by Richelle Mead: First let me say that’s the stupidest name for the series. Second let me say I have absolutely no fondness for vampires at all. It’s more of a redone vampire story with lots of guardian type fighting mixed in. This was recommended by a few of my friends and by Veronica Roth (author of the Divergent series). I flew through this series with a trip to two libraries in one day since I wasn’t willing to wait for the weekend for the next book. So just as a warning the first book is just okay, but you need to press through because the rest of the series is totally worth it.

Ender’s Game and Ender’s Shadow by Orson Scott Card I read Ender’s Game in highschool and the Shadow spin off series when they first came out 10 years ago. These books are some of my favorites and have been since I read them in highschool. I recommend Ender’s Game and then the Bean spin off series (the Shadow books) I enjoyed the Ender books but I didn’t love them like the Shadow books. They are so so good. Plus they are finally making this into a movie. If you’re into the whole dystopian genre and have not read Ender’s Game yet you need to it’s a classic. The audio versions are great I relisted to Ender’s Game and the whole Shadow series recently and they had me pulling out my paper versions to write down quotes again.

And then two honorable mentiones for those of you who are aboard the dystopian train, I finally read Legend by Marie Lu and Shatter Me by Tahereh Mafi and enjoyed them both. They are fun quick reads.
I’ve written reviews for all of these if you want more info or want to see the descriptions on goodreads to see more of what they are each about.