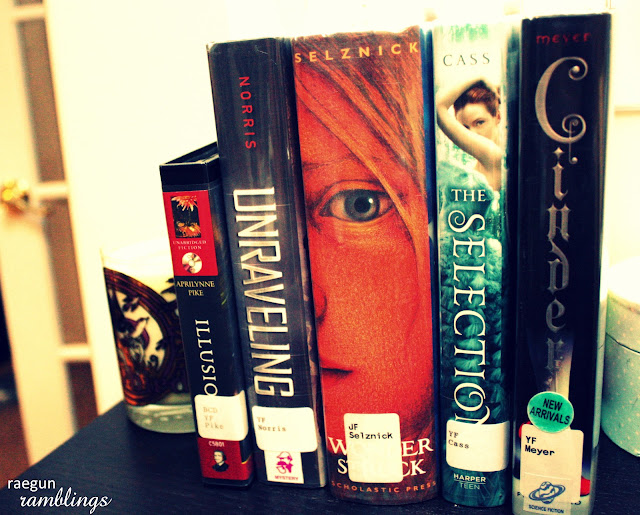 Cinder by Marissa Meyer – Let me first off say I loved loved loved Cinder! When I first heard of the storyline a cyborg Cinderella and read the Goodreads synopsis I though ugg that sounds so lame and not for me. But I was SO wrong! Even with my initial reactions I was still found myself curious so when my friend Mark told me it was his favorite book he’s read all year I put it on my library hold and I am so glad I did.

The retelling was so different, in a good way, than than I expected. Plus there was a second layer of story which kept things even more interesting and fresh. The main Cinderella plot points were there but they came at unexpected times and in unexpected ways so it felt clever and not just the same old story. I loved the characters.

I think the synopsis does not do this book justice. It is not to heavy on mechanics/alien stuff which to be honest I was expecting from the summary. I can only take small amounts of those. The characters all feel human just some have features or powers. And I really liked the characters. I’m assuming I’m not the only one who was unsure about Cinder but my vote is for you to give it a go. I especially think this is a good one for people who liked partials.

Unraveling byElizabeth Norris – I really wanted this to be better. The idea is so fun. I was totally sucked in and then the sci fi bit happened but it felt like an info dump or the beginning of a sitcom where they tell you the premise of the story. It was just felt like a different story and took a while for the story to flow again. But it was fun I’ll definitely be checking out the next book. If you like interesting scifi and philosophical alternate reality type of stuff I think the shortcomings are worth it to pick up this book. I’m glad I read it.

The Selection by Kiera Cass – I didn’t expect to like this book as much as I did but I really enjoyed it (and this is from a non-Bachelor/Bachelorette fan). It has hints of a dystopian world and aimed at an older reader both of which were perfect for me. Think of it as a Princess Academy for older folk with the hint that dystopian goodness will come into play in the sequels.

Wonderstruck byBrian Selznick – I need your help with this one. I kept on trying to read it and did not get sucked in. Then I watched Hugo and while I loved the beautiful movie bits from the original films I was kind of bored so I gave up. Yeah I know judging a book by it’s movie how awful a person I am! So you tell me should I give it another shot? Is it one of those books I should push through?

Illusions (Wings #3) by Aprilynne Pike – I swear these books just get better and better. I’ve been listening through this Wings series and even though I’m not a fairy person At All, I have really enjoyed them.

So what have you been reading?

And have you listened to any great books lately? I need to refill my ipod soon and need some good audiobook recommendations that the library or overdrive may have!

And if you want to be friends on Goodreads I always love having more reading buddies!

« What We Wore Read and Made Link Party and Features #36
Tutorial: Padded, Upholstered, and Pocketed Ikea STIG Stool Hack Part I »