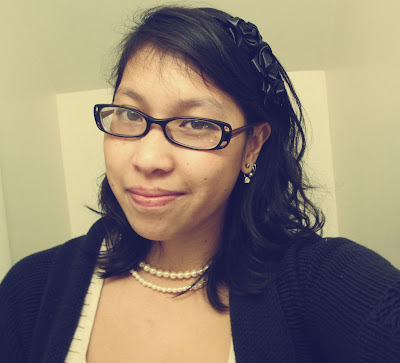 On New Years Eve, with no real plans in mind, I was over come with a need to make a fancy headband. Earlier in the week I had tried on this headband in black at Anthropologie, which while I adored, I didn’t want to spend 32$ on it. Yeah. So I did my best with no real time to make something similar. This is what I came up with. It’s different which means I can now try and figure out how to make the more perfect rose like in the Anthro band, but I’m quite happy with it and it was easy peasy. So here are the steps. 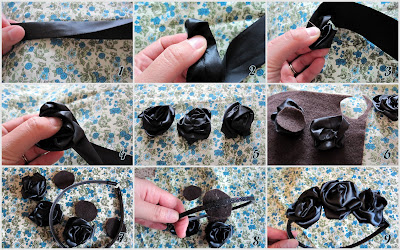 (click on the image to enlarge, more shots on my flickr)
You’ll Need
-felt scraps
-2 inch satin ribbon (I had a spool but I think you should be safe with 2 yards)
-head band
-glue gun

1. fold ribbon in half lengthwise
2. fold ribbon in a loop
3. fold and loop ribbon on top of itself while twisting a couple times (this took me some experimenting to figure out how I liked it) take a stitch to secure it in place.
4. fold and loop and twist and stitch more until it’s as full as you like then cut the ribbon and secure the thread with some knots
5. repeat until you have three rose-ish things
6. cut some felt circles a little smaller than the roses, you just don’t want them sticking out 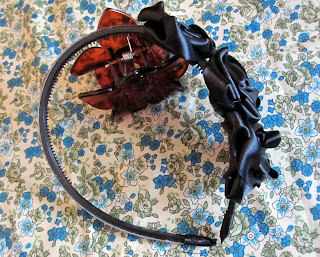 7. figure out where you want the top rose to go, I put the head band on looked in the mirror and noted where I thought it would look nice
8. glue the first felt base onto the underside of the headband, then glue the first rose to the headband and felt base, repeat with the other two roses
9. look at your creation, wear it and feel all fancy.

So there you go, now you can make your own rose headband. Or if you’re my sister, you can look at mine while it’s on my head, ON MY BIRTHDAY, and ask to borrow it for later that day.

UPDATE: I forgot to remind everyone about the flickr group. Join it (it’s just brand new we need members) and for sure if you make one of these post your pictures there.

Top Gifts for Sewing Enthusiasts from Scissors to Cricut