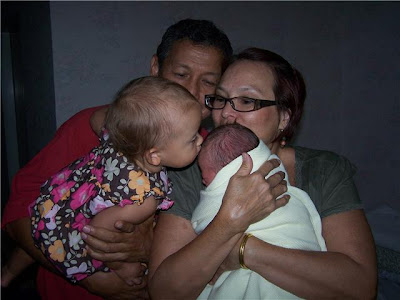 1) I have a new baby niece: Lanna Anne. Look how cute baby wah wah is with her new little sister. My mom said that the morning after the baby was born Tira said “Go” and my mom asked her where, and she made a motion like rocking a baby and said “baby” how cute is that? The picture is of wah, Lanna and my parents.

2) So in the juggling of the last month I put off the shop update, well I’ve got a build up of new stuff that really need to make their way into the etsy shop so I guess I’ll do that next Thursday. All the stuff that has been previewed here and in the bigcartel shop will be added plus some other goodies including some Halloween stuff.

3). I’ve decided to downsize my bigcartel shop. It gets hits but I just don’t have the means to advertise it in the way that makes a full set up worth it. I’ll be keeping the basics up there but mostly use it as advance sales for the new stuff. So I’ll continue to put things there as I create them but they’ll probably cycle through since I can only have 25 at a time. Well at least that’s what I’m thinking as of now.

edit:
4) I’ve also given into twitter. I totally resisted visited twitter but then some people put feeds to their own twitters on their blogs and I got sucked in, I knew I would that’s why I didn’t go check it out errrr. so you will see on the right my twitterings