X
Join The Email Club!
Home » Bookish » book geekery » Ten Books for Fans of Twilight You May Like Even Better 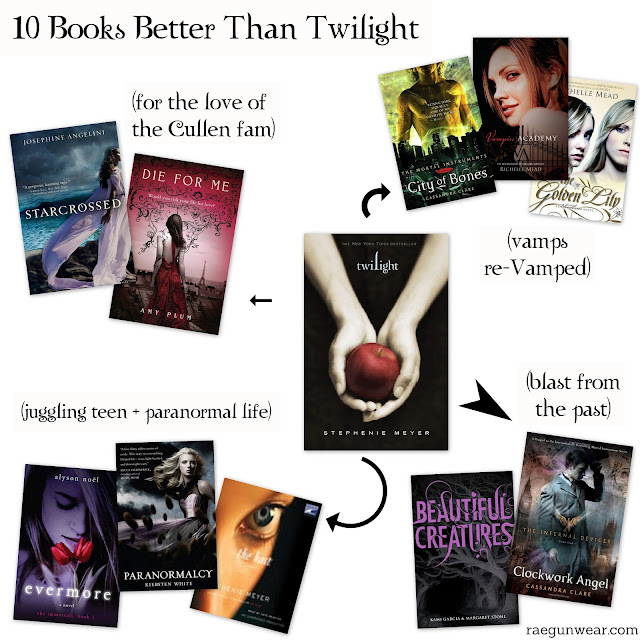 Next next weekend the final installment of the Twilight movies, Breaking Dawn Part II, comes out. I jumped reluctantly on the Twilight train pretty late. I swore that I did not like vampires (how did I know I’d never given them a chance), I was horrified that they took my precious Cedric Diggory (I think he makes a great Edward), and I heard that Bella was a wimpy role model (but then again I don’t believe all book characters need to be role models and in fact other characters in the books are great). So once I gave it a chance I really enjoyed the books. Of course they aren’t marvelous works of literature, but they are good solid fun that got tons of people reading.

And as much as Breaking Dawn Part I had me cracking up at inappropriate parts -sorry to anyone who was in the theater with me, but the wolves mind talking, oh yeah- I’ve gotta celebrate an end of an era. So, for today’s Top Ten Tuesday freebie on The Broke and The Bookish I’ve got 10 suggestions for people who liked the Twilight books (I’ve limited the list only to books I’ve actually read and enjoyed). These all involve young adults with powers of some sort.

As always you can find more about each of these books, my reviews and if you want befriend me on goodreads. Also check back in next Monday for a fun Breaking Dawn Blogger Party complete with some of my favorite bloggers.

For the Love of The Cullen Family
One of my favorite aspects of the Twilight books was the Cullen family. I just loved how they worked together even when they didn’t agree they were trying to do what was best. Both Starcrossed by Josephine Angelini and Die for Me by Amy Plum are newer reads for me and I adored them both. Besides being awesome books about kids with powers they gave me the same family fuzzies I got from the Cullens.

Vampires Re-Vamped
Not that I can say I really am familiar with traditional Vamp lore, but I do know that Meyers per her own spin on the blood suckers. If you want more non-tradition vampires in your life Richelle Mead writes one (or many many) good book. Her Vampire Academy books are great and perfect for those who kind of like the vampire thing but not at the same time (Bloodlines and Golden Lily are spin offs so don’t even read the description until after you read the VA books unless you want to get some spoilers). And although Cassie Clare’s The Mortal Instruments books aren’t about vampires specifically there are a few vampire characters that will feed you if you’re wanting some more vapire action. Plus I think the rest of the paranormalness of here series totally fits the bill.

Juggling Teen + Paranormal Life
I’m not going to lie, I think Bella was super annoying. Sorry Bella lovers. But at the same time I thought she was a realistic teen. It was fun watching and her friends all juggle normal high school life and deal with the emotions a normal teen would. If you haven’t read Stephenie Meyer’s The Host yet, do it. So many interesting ideas and in my opinion even better than the Twilight books. Paranormalcy by Kiersten White is action filled with a fantastic sassy teen main character that is realistically wonderful. And Alyson Noel’s Evermore from the Immortals series has more of the fun real school life juggling for you.
Blast from the Past
And last but not least I really enjoyed the historical bits that we were given in the Twilight books. The Caster Chronicles by Kami Garcia and Margaret Stohl, The Immortals (also mentioned above), and The Infernal Devices another great series from Clare all have an aspect of that in their tales too which in my opinion was lots of fun.
I haven’t read many vampire books so I know this list is lacking that but I’d love you to comment with some of your favorites and any other books that you think Twilight fans might love!

Things I’m Loving: Beside My Bed