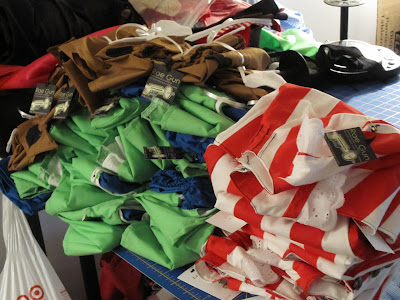 just wanted to say a quick hi. I’m still in the middle of finishing up my costumes orders but happily sent off this first large batch yesterday. I packed them up at a MacDondald’s playgroud table while Tira happily played dispite some imaginative girl telling every one not to go up the slide because there was a ghost that scratches people. Ummm yeah, we later found out that there was an actual girl scratching kids and is typical her parent was totally oblivious to the fact that some of the moms were crawling up the slides to tell her to knock it off. Yeah.

Okay I must get back to the Dorothys now but I want to let you know that I will be opening a fabric giveaway tomorrow and I’m happy to announce there will be a handful of ready to ship costumes but I won’t get to listing them until this weekend (after the final shipments).