I’m really excited about the last few books I’ve read. They just kinda sparked something in me. If you need to take one book from my list I vote for The Jewel. I finished it earlier this week and I realllllly liked it. But the others are super good to so just add them all to your list reading list okay ;) And I always love to hear what good books you’ve been reading so please let me know in the comments!

The Jewel by Amy Ewing

The Jewel means wealth. The Jewel means beauty. The Jewel means royalty. But for girls like Violet, the Jewel means servitude. Not just any kind of servitude. Violet, born and raised in the Marsh, has been trained as a surrogate for the royalty—because in the Jewel the only thing more important than opulence is offspring.Purchased at the surrogacy auction by the Duchess of the Lake and greeted with a slap to the face, Violet (now known only as #197) quickly learns of the brutal truths that lie beneath the Jewel’s glittering facade: the cruelty, backstabbing, and hidden violence that have become the royal way of life.Violet must accept the ugly realities of her existence… and try to stay alive. But then a forbidden romance erupts between Violet and a handsome gentleman hired as a companion to the Duchess’s petulant niece. Though his presence makes life in the Jewel a bit brighter, the consequences of their illicit relationship will cost them both more than they bargained for.

You guys I totally adored this book! I wasn’t expecting to like The Jewel this much but I did. It seems like we’ve been bombarded by dystopian in the last few years and if you’re like me you’ve developed a more picky pallet for the genre. But let me just say this one does it right. The Jewel wasn’t really on my radar. I listened to the audiobook and was hooked. The story, the characters, it was my kind of book. It’s got thoughtful girls, some nasty villains, good friendships, secret romance, powers, and a new world that is so fun to peer into. If you’ve read The Handmaiden’s Tale or Birthmarked it has familiar elements of the surrogates as slaves (but better than those). There is a competition aspect as well as fine accommodations that you find in The Selection. There was also a Hunger Games vibe for me in the preparation before the surrogate auction and behind the scenes shenanigans. Pick it up you won’t be sorry.

Meant to Be by Lauren Morrill

Meant to be or not meant to be . . . that is the question. It’s one thing to fall head over heels into a puddle of hazelnut coffee, and quite another to fall for the—gasp—wrong guy. Straight-A junior Julia may be accident prone, but she’s queen of following rules and being prepared. That’s why she keeps a pencil sharpener in her purse and a pocket Shakespeare in her, well, pocket. And that’s also why she’s chosen Mark Bixford, her childhood crush, as her MTB (“meant to be”).But this spring break, Julia’s rules are about to get defenestrated (SAT word: to be thrown from a window) when she’s partnered with her personal nemesis, class-clown Jason, on a school trip to London. After one wild party, Julia starts receiving romantic texts . . . from an unknown number! Jason promises to help discover the identity of her mysterious new suitor if she agrees to break a few rules along the way. And thus begins a wild goose chase through London, leading Julia closer and closer to the biggest surprise of all: true love.Because sometimes the things you least expect are the most meant to be.

I loved Meant to Be. I’ve been in the mood for light fluff contemporary. This fit the bill perfectly. And I say that not as a bad thing it’s just fun and easy to read with out having to think to hard to follow or enjoy it you know. I had this sitting on my ipod forever. Why hadn’t I read it before? If you want some light travel contemporary romance this is so fun. I really enjoyed it and there are some unexpected twists at the end. If you’re a fan of Anna and the French Kiss and love traveling to other places in books this is a good one. 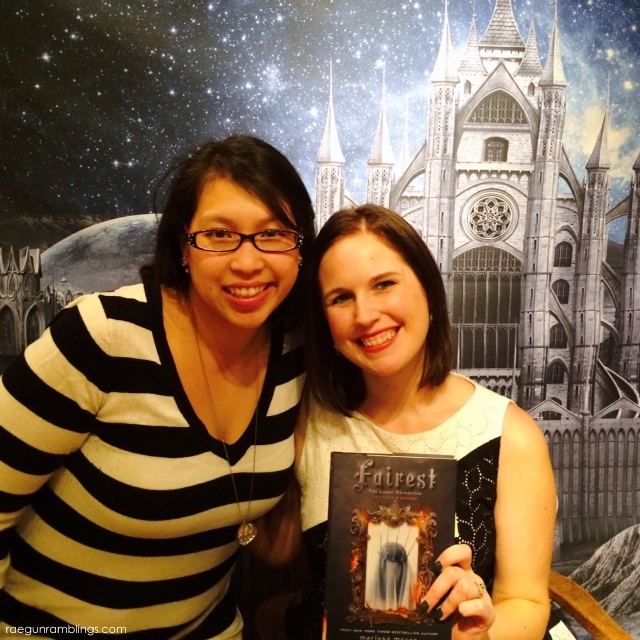 In this stunning bridge book between Cress and Winter in the bestselling Lunar Chronicles, Queen Levana’s story is finally told.Mirror, mirror on the wall, Who is the fairest of them all?Fans of the Lunar Chronicles know Queen Levana as a ruler who uses her “glamour” to gain power. But long before she crossed paths with Cinder, Scarlet, and Cress, Levana lived a very different story – a story that has never been told . . . until now.

I was able to sneak away to attend a signing for Fairest and Marissa Meyer was just as lovely and charming as every. But the book…oh the back story was so good. As good as the other books? No but I loved having the history and new perspective. If you’re a fan of The Lunar Chronicles reading this is an absolute no brainer. Really it’s a good read and so many pieces fall into place (I know some times it’s hard for me to keep everyone straight in the books holey moley there are so many characters). And a bonus the first 3 chapters of Winter are in the back of this puppy!

Get Even by Gretchen McNeil

The Breakfast Club meets Pretty Little Liars in Gretchen McNeil’s witty and suspenseful novel about four disparate girls who join forces to take revenge on high school bullies and create dangerous enemies for themselves in the process.

Bree, Olivia, Kitty, and Margot have nothing in common—at least that’s what they’d like the students and administrators of their elite private school to think. The girls have different goals, different friends, and different lives, but they share one very big secret: They’re all members of Don’t Get Mad, a secret society that anonymously takes revenge on the school’s bullies, mean girls, and tyrannical teachers.

When their latest target ends up dead with a blood-soaked “DGM” card in his hands, the girls realize that they’re not as anonymous as they thought—and that someone now wants revenge on them. Soon the clues are piling up, the police are closing in . . . and everyone has something to lose.

Get Even is LOTS of fun. A great mystery. Unlike so many ya books lately you don’t have to worry about any “horror” while the story does include murder there’s nothing graphic. It’s more of a good solid mystery with lots of high school politics and drama. Very entertaining I cannot wait to read the next one. If you have a chance to listen to the audiobook I highly recommend that!

The Immortal Crown by Richelle Mead (Age of X #2)

Gameboard of the Gods introduced religious investigator Justin March and Mae Koskinen, the beautiful supersoldier assigned to protect him. Together they have been charged with investigating reports of the supernatural and the return of the gods, both inside the Republic of United North America and out. With this highly classified knowledge comes a shocking revelation: Not only are the gods vying for human control, but the elect—special humans marked by the divine—are turning against one another in bloody fashion.

Their mission takes a new twist when they are assigned to a diplomatic delegation headed by Lucian Darling, Justin’s old friend and rival, going into Arcadia, the RUNA’s dangerous neighboring country. Here, in a society where women are commodities and religion is intertwined with government, Justin discovers powerful forces at work, even as he struggles to come to terms with his own reluctantly acquired deity.

Meanwhile, Mae—grudgingly posing as Justin’s concubine—has a secret mission of her own: finding the illegitimate niece her family smuggled away years ago. But with Justin and Mae resisting the resurgence of the gods in Arcadia, a reporter’s connection with someone close to Justin back home threatens to expose their mission—and with it the divine forces the government is determined to keep secret.  REALLY liked this. Although this isnt being marketed as YA this book very comparable content-wise with many more mature YA books. The main differences I see are that the story flows a bit slower than mores YA books and hits some more mature topics. Unlike most of the books I read this is marketed to adults and for this series it just means a bit more mature themes and topics for this series that mostly means a bit more detailed and slower pacing and some sexual stuff (although not tons and not graphic it ranges from rape to prostitution to romantic stuff). But I really liked this book. I feel like most of Mead’s first books are all about world building and introducing characters and now that that’s out of the way she can get to what she’s good at developing awesome characters and crazy story lines. I love the complex characters and different plot lines are as well as the the strange magic system. Lots off goodness here. If you like girls that can kick butt, complicated love interests, and a good mystery check this out.

The Geography of You and Me by Jennifer E. Smith

Lucy and Owen meet somewhere between the tenth and eleventh floors of a New York City apartment building, on an elevator rendered useless by a citywide blackout. After they’re rescued, they spend a single night together, wandering the darkened streets and marveling at the rare appearance of stars above Manhattan. But once the power is restored, so is reality. Lucy soon moves to Edinburgh with her parents, while Owen heads out west with his father.Lucy and Owen’s relationship plays out across the globe as they stay in touch through postcards, occasional e-mails, and — finally — a reunion in the city where they first met.A carefully charted map of a long-distance relationship, Jennifer E. Smith’s new novel shows that the center of the world isn’t necessarily a place. It can be a person, too

I’ve been reading through Jennifer E. Smith’s books like a crazy girl, they are just so fast and fun. I really liked The Geography of You and Me but it is different than her other books I’ve read. The pacing for this book is much slower and at first I thought that was an annoying thing. But after finishing it I’ve decided it fits perfectly with the story. This tale takes place during a much longer time period in many different places. It is so fun to travel all over the US and world with these different characters. It wasn’t a page turner but it was really enjoyable and a sweet story. 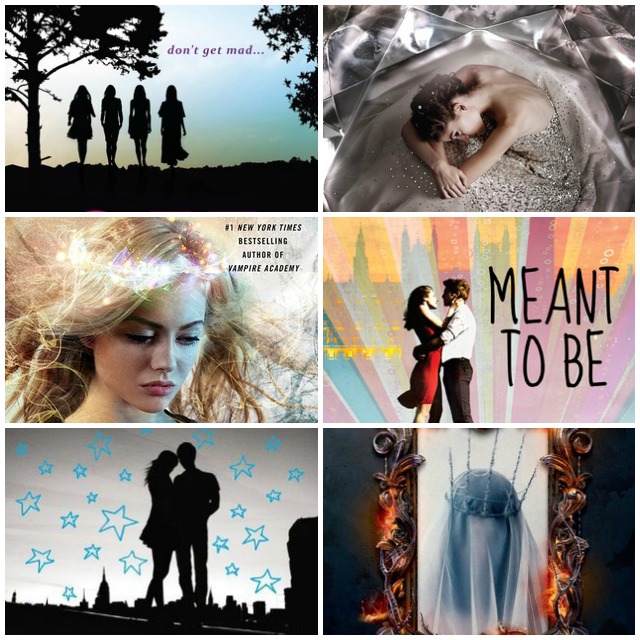