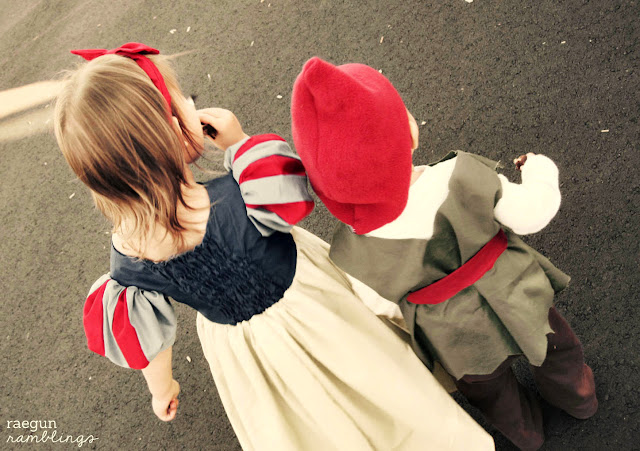 I survived. Here are some of my favorite shots of our Halloween. The naughties’, the music maker’s and my costumes were pushed back until the night before/day of Halloween since there were so many RaeGun orders and house selling items that demanded all my time before that but I’m pretty happy with how they turned out.

(move your cursor over the pictures to see captions)

Lanna was supposed to wear her birthday gift, that Luchadore costume I made for her but even with making the mask larger the stinker would not let us put the mask on her at all. Hmmph so I made her a 5 minute dwarf costume that looks more like a gnome since I was totally against making her a disney-ish dwarf. Whatever she looks cute and it’s probably the only Halloween we can make her be a dwarf while Tira gets to be princess Snow White. She got a lot of “he’s so cute” ‘s .

I’m the Wicked Witch of the East and Daniel was the house that crushed me. Yup. I seriously think the best part was sneaking those two candy all weekend I gave Lanna a whole fun size bar just to gnaw on hahaha. Hope you all had a fun Halloween. I didn’t get to go skank watching at the clubs like I normally like to on Halloween, I was just too exhausted after a friend’s wonderful party so I didn’t see too many costumes did any of you guys see some good ones?