X
Join The Email Club!
Home » momlife » home and garden » Making It Ours, A Home that Is: House Tour Part I 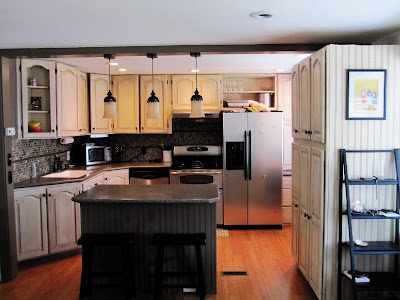 So I’m not calling these before and afters because I think these are more like the way before and before shots. We’re still in search of a lot furniture and art and other stuff to make afters but here’s a few shots of where we are now. I’ve got pictures I took of how the previous owners had their house set up all staged for selling and how we have it now (we’ve got very different tastes than they did).

Entry Way
Besides getting a big mirror to put above the stairway and some other stuff up on the walls I think we’re mostly ready here. I bought a rug to go under the stools but hated it when I got home, but I like how easy it is to clean under the island without the rug.

I may want to do something with that window spot besides let it be a place to collect junk. I’m not a up for just displaying nick nacks like they did but I’m not sure. Anyone have ideas?

Front Room
There’s a point in unpacking where you just get tired of it and shove the rest into a spare room, garage or other designated “I’ll get to it later” room. We reached that point about week two in the new home and I’ve been trying to unpack that room little by little each week. Since it’s on the main floor it was easy just to leave everything there instead of carry up or down stairs just to have to move it again but it’s kinda tacky I should take care of it soon.

Unfortunately it’s the first room of the house so I really want to clear it out so it doesn’t look so junky but I’ve just been so busy or too tired. I’m hoping it will be like a quite office and/or spare bedroom. We’ll for sure have all our books in there (which are plentiful) but I’m not sure past that.

Kitchen
I adore my kitchen it is so functional. I love my island and the hidden window area. I love the double oven and how I only have to heat up a small part most of the time. But most of all I love how the trash cans are so convenient and HIDDEN! The only thing I don’t like is the style of the hanging lamps. I kind of hate them but I think they are okay and I’m not positive of what I want there. I was thinking maybe like cylinder shades but I’m not sure, let me know if you have any ideas. I’m totally searching for something to leave on the island, like a big bowl or maybe nesting flower dishes but I want them to be similar shades as  my ice cream bowls in the corner shelf then and my black apple print by the window (I like the yellow, orange, red thing).

So that’s the first part of the tour. More to come.