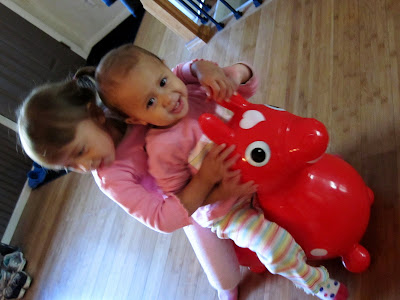 I was asked to do a review a while ago and chose the Rody, kinda a funky, next generation rocking horse from CSN Stores which is a collection of over 200 stores with various products from kids bedding, to cookware, to awesome kid’s furniture and toys, to amazing modern furnishings and more. The service was great and fast. Seriously I don’t think I’ve ordered anything online and received it that fast.

But since the naughty girls have been in Thailand for the last six week I had to wait to review it. But seriously the second started I blowing it up Lanna was saying horsey horsey (which by the way requires you to pump air into it’s bottom which was extra funny in Lanna’s excitement she’d jostle the horse and the pump would come out and air out and yeah).

But they’ve really enjoyed it, without prompting bouncing and saying boing boing boing. I think it’s adorable in a wonderfully retro way. For a big kid toy in the house I love it, it’s almost art to me since the design is so much better than most kiddo toys so I don’t banish it to the boy bin or play room like most of the other toys.