X
Join The Email Club!
Home » Bookish » book geekery » What I’ve Been Reading: Highs and Not So Highs 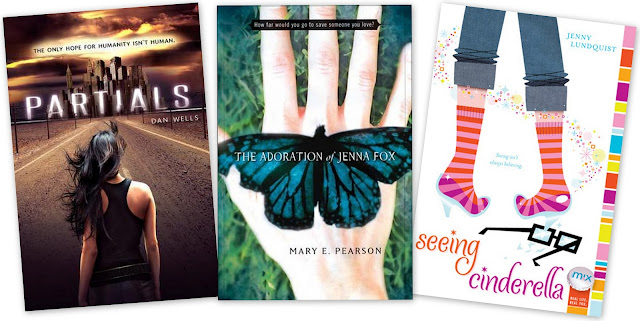 First I must declare that I have a new found love for audiobooks. Part of it is because I decided I was walking way too slow and tripping way too often when I was walking with the paper version in tote so I picked myself up a shinny ipod nano and fell instantly in love. Do you know that little thing has a pedometer that not only tracks steps but your times, distances and more um yeah it’s awesome. Not that they need any more help to sell their products I just love mine. But any ways it seems like I’m listening to books all the time since it’s great to keep me on task while I work on Rae Gun orders and during my walks not that that has deterred me from still harboring a giant stack of the physical kind, I’ve just drastically upped my story intake ;)

Here are a few that have stood out. See everything I’ve been reading and longer reviews of each on my goodreads account and if you’re on goodreads I’d love to be friends.

Partials by Dan Wells – I’ll be finishing this today but I can say it does live up to the hype. A great strong female lead who didn’t annoy me like so many of the teenage protagonists I come across. Think dystopian with major bioethical angles oh and definitely a good amount of action.

The Adoration of Jenna Fox by Marry E. Pearson – I listened to this one and really enjoyed it. It was a great entertaining story of a girl who has been in an accident and doesn’t remember much trying to figure out who she was and who she is. It was a present for my philosophical mind since I kind of miss that. It was fun to think about issues of bioethics as well as personal identity. I feel like this is one of those books that I definitely took something away from and caused me to grow and challenged me to think but it still managed to be entertainment and didn’t feel like work at all.

The Serpent’s Shadow by Rick Riordan – This was a sequel that I was really looking forward to. I’m not sure if I am just getting tired of the story line but it was work for me to finish. I never liked the main characters as much as the characters in Riodan’s other books so I think part of it was in the what third time trying to save the world by yet another solstice or whatever they characters couldn’t carry it for me.

Life As We Knew It by Susan Beth Pfeffer – Holy cow this was a bizarre book. People rated it so high. There is something good about this book but at the same time it is so realistic I’m not sure it’s better than watching the news. It’s the story of a family and how they deal with the aftermath of a meteor crashing into the moon and throwing the weather and tides off. The narrator is how you’d expect a 16 year old to be complaining most of the time, depressing but humorous others and every once in a while strong. Part of me feels like it’s just a book of “if this happened, how would a family relate” most of it was pretty depressing and hopeless, the good parts were still depressing. But it totally sucked me in and I’ll be reading the sequels partly because I really hope there is some resolution.

Seeing Cinderella by Jenny Lundquist – This is a darling midgrade book where the main character gets a magic pair of glasses which allows her to see what people are thinking. The main character has a cute and totally realistic personality which I loved. At times it felt after school special-y but that’s from my adult perspective. I’m glad I read it and totally recommend it. Plus it was a nice quick breath of fresh air to pace me through all the dystopian and end of the world reads I’ve been picking up.