Home » book geekery » What I’ve Been Reading: Something for Everyone 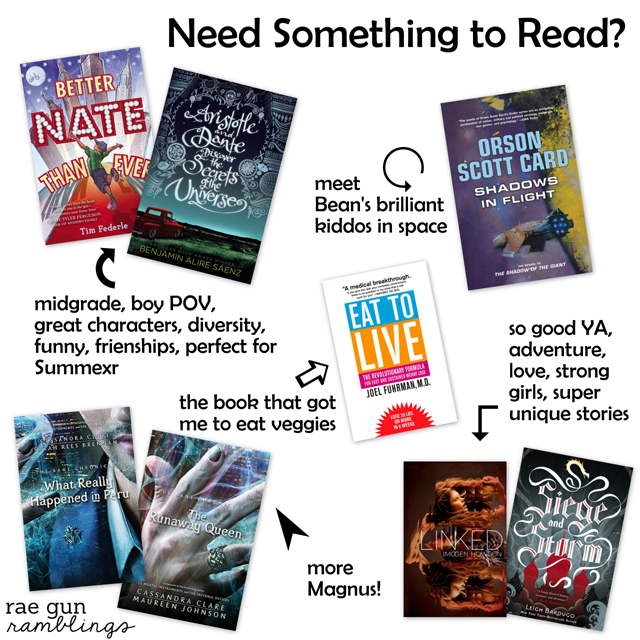 My reading has been a bit down lately since I was prepping for, at, and catching up for fabric weekend a lot but I have read (and listened to) some good books that I wanted to share.. Here are a few of my favorites from what I’ve been reading!

Better Nate than Ever – Nate Foster has big dreams. His whole life, he’s wanted to star in a Broadway show. (Heck, he’d settle for *seeing* a Broadway show.) But how is Nate supposed to make his dreams come true when he’s stuck in Jankburg, Pennsylvania, where no one (except his best pal Libby) appreciates a good show tune? With Libby’s help, Nate plans a daring overnight escape to New York. There’s an open casting call for E.T.: The Musical, and Nate knows this could be the difference between small-town blues and big-time stardom.

This was a great midgrade read. Nate had me cracking up with his adolescent humor, observations and adventures. If you’re a fan of Glee and looking for an easy cut read for the Summer check this out. I listened to it recommend the audio version.  (see my full review)

Aristotle and Dante Discover the Secrets of the Universe – Aristotle is an angry teen with a brother in prison. Dante is a know-it-all who has an unusual way of looking at the world. When the two meet at the swimming pool, they seem to have nothing in common. But as the loners start spending time together, they discover that they share a special friendship—the kind that changes lives and lasts a lifetime. And it is through this friendship that Ari and Dante will learn the most important truths about themselves and the kind of people they want to be.

Follow Ari and Dante and their unexpected friendship in this beautiful coming of age story that hits on many tough subjects from sexuality, violence, not fitting in, diversity, and more without being too heavy. The story had me smiling, tearing up, and laughing out loud. Great story of friendship and growing up. I listened to it and recommend the audio version. (see my full review)

Shadows in Flight – At the end of Shadow of the Giant, Bean flees to the stars with three of his children–the three who share the engineered genes that gave him both hyper-intelligence and a short, cruel physical life. The time dilation granted by the speed of their travel gives Earth’s scientists generations to seek a cure, to no avail. In time, they are forgotten–a fading ansible signal speaking of events lost to Earth’s history. But the Delphikis are about to make a discovery that will let them save themselves, and perhaps all of humanity in days to come.

For there in space before them lies a derelict Formic colony ship. Aboard it, they will find both death and wonders–the life support that is failing on their own ship, room to grow, and labs in which to explore their own genetic anomaly and the mysterious disease that killed the ship’s colony.

It’s not secret that I’m a huge fan of Ender’s Game and the Shadow books that follow Bean. I have loved to watch him grow and in this book we get to see Bean as dad. And not just do we get more of Bean but we get to mean 3 brilliant, sassy, and wonderful kiddos. I definitely recommend it to fans of the series. (see my full review)

Eat to Live – When Mehmet Oz or any of New York’s leading doctors has a patient whose life depends on losing weight, they call on Joel Fuhrman, M.D. In EAT TO LIVE, Dr. Fuhrman offers his healthy, effective, and scientifically proven plan for shedding radical amounts of weight quickly, and keeping it off.

Losing weight under Dr. Fuhrman’s plan is not about willpower, it is about knowledge. The key to this revolutionary diet is the idea of nutrient density, as expressed by the simple formula Health=Nutrients/Calories. When the ratio of nutrients to calories is high, fat melts away and health is restored. Losing 20 pounds in two to three weeks is just the beginning. The more high-nutrient food Dr. Fuhrman’s patients consume, the more they are satisfied with fewer calories, and the less they crave fat and high-calorie foods. Designed for people who must lose 50 pounds or more in a hurry, EAT TO LIVE works for every dieter, even those who want to lose as little as 10 pounds quickly. No willpower required-just knowledge

While I’m not buying into the practically vegan diet that is recommended by this book I did feel extremely convicted and exceptionally motivated to get more veggies into our diet. I’ve been trying to eat more vegetables for years but something about this book made it click. I’ve been doing it for a week and my tastes buds have started to crave veggies and I’ve seen the scale go down. Super good read. (see my full review)

The Bane Chronicles: What Really Happened in Peru and The Runaway Queen – These standalone e-only short stories illuminates the life of the enigmatic Magnus Bane, whose alluring personality populates the pages of the #1 New York Times bestselling series, The Mortal Instruments and The Infernal Devices series. These stories in The Bane Chronicles are written by Cassandra Clare and fun co-authors.

I’ve had fun listening to the audio version of the first installments few of The Bane Chronicles. It’s been a blast getting a better peek at one of my favorite characters from Cassandra Clare’s books. I definitely recommend checking it out for Magnus fans.

Linked – Elissa used to have it all: looks, popularity, and a bright future. But for the last three years, she’s been struggling with terrifying visions, phantom pains, and mysterious bruises that appear out of nowhere.

Finally, she’s promised a cure: minor surgery to burn out the overactive area of her brain. But on the eve of the procedure, she discovers the shocking truth behind her hallucinations: she’s been seeing the world through another girl’s eyes.

Elissa follows her visions, and finds a battered, broken girl on the run. A girl—Lin—who looks exactly like Elissa, down to the matching bruises. The twin sister she never knew existed.

Now, Elissa and Lin are on the run from a government who will stop at nothing to reclaim Lin and protect the dangerous secrets she could expose—secrets that would shake the very foundation of their world.

Riveting, thought-provoking and utterly compelling, Linked will make you question what it really means to be human

This book is a great fun futuristic/space sci-fi distopian adventure. The story runs so much deeper and has a super crazy twist but it’s hard to give too many details without spoiling the tale. Just trust me it’s a fast super unique read full of great complex characters, moral conundrums, that will suck you in. (see my full review)

Siege and Storm – Hunted across the True Sea, haunted by the lives she took on the Fold, Alina must try to make a life with Mal in an unfamiliar land. She finds starting new is not easy while keeping her identity as the Sun Summoner a secret. She can’t outrun her past or her destiny for long.

The Darkling has emerged from the Shadow Fold with a terrifying new power and a dangerous plan that will test the very boundaries of the natural world. With the help of a notorious privateer, Alina returns to the country she abandoned, determined to fight the forces gathering against Ravka. But as her power grows, Alina slips deeper into the Darkling’s game of forbidden magic, and farther away from Mal. Somehow, she will have to choose between her country, her power, and the love she always thought would guide her–or risk losing everything to the oncoming storm.

This is what a sequel should be like. If you haven’t read the first book Shadow and Bone make sure it check it out it’s one of my favorites and this second book may be even better. In this installment we get a new awesome character who’s full of sarcasm and humor, really I LOVE him. This tale is one part pirate adventure, one part royal intrigue,  and all parts awesome. Super great read.