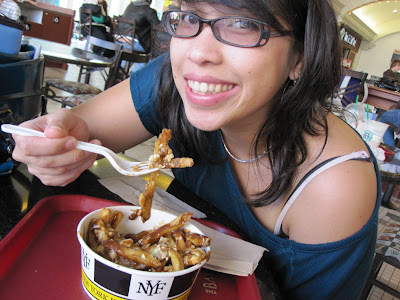 (Poutine)
For those of you are new  to my blog I write these weekly plans to help me spend less (I kinda of love grocery shopping, yea I know I’m weird), to save time and to try and help us eat in more often. Also I love knowing what other people eat so I thought it would be fun to share. For a while I’ll be adding my plans for what greens I’ll be eating since one of my resolutions is to build a habit of introducing more green veggies into our diet. Maybe some day it’ll be so normal for us that I won’t have to mention them any more.

We’re fresh back from the vacation which I’ll post about tomorrow but now we’ll stick to food. This poutine above bought at the mall food court in Victoria was some of the best food we had during the cruise portion of the trip. Let’s just say that the food on our not cheap Princess Cruise was terrible. So not inedible but probably not as good as Sizzler’s and about the same level as Denny’s (you know some times it taste yummy but it’s still Denny’s and most isn’t so hot). It was super disappointing actually. It just totally tasted massed produced. It was no comparison to the food I make at home and the cheapest meals we eat out normally and I’m talking both the dinning room food and the buffet. And it by no means was near the food we had on our super cheapo Royal Caribbean cruise we took for our honeymoon. I’ll do an official cruise review later this week but lets just say as far as food goes I’m thrilled to be home.