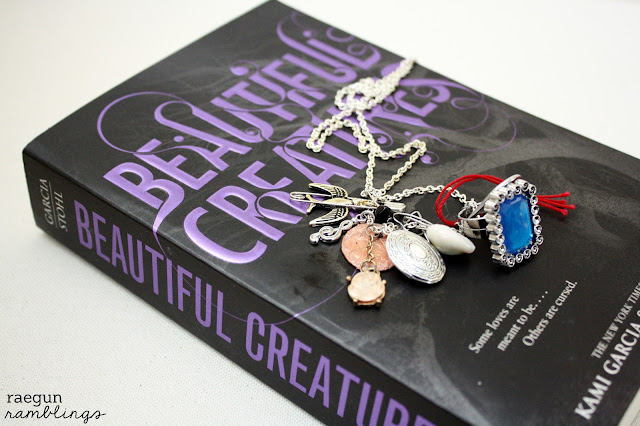 I shared my thoughts on the Beautiful Creatures Movie last week but I also want to share my thoughts on all of the Caster Chronicle books (that’s what the series is called)  in this awesome series. And since I can’t control my crafty urges I also have a tutorial on how to make your own Lena Duchannes necklace just in time for you to wear it to the movie which opens in theaters today.  And because I can’t help but share my geekiness I’m giving away a bunch of Beautiful Creatures swag and Lena necklace. Scroll down for more details on the giveaway. 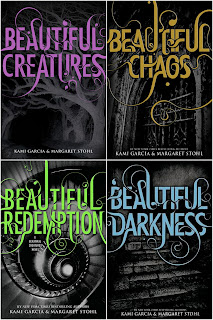 Lena Duchannes is unlike anyone the small Southern town of Gatlin has ever seen, and she’s struggling to conceal her power, and a curse that has haunted her family for generations. But even within the overgrown gardens, murky swamps and crumbling graveyards of the forgotten South, a secret cannot stay hidden forever.

Ethan Wate, who has been counting the months until he can escape from Gatlin, is haunted by dreams of a beautiful girl he has never met. When Lena moves into the town’s oldest and most infamous plantation, Ethan is inexplicably drawn to her and determined to uncover the connection between them.

In a town with no surprises, one secret could change everything. (description from Goodreads)

After watching the movie I had an even deeper appreciation for the complexity of the story. Guys it is SO much better and deeper than the movie does (or even could) get across. The story is told (mostly) from Ethan’s perspective (yup a male POV) and the romance and friendships are smart and fun. Ethan and Lena are such a sweet couple and they struggle through so many hoops to be together and help each other through various trials. Oh and by the way they can kelt or mindspeak with each other, it’s kind of awesome. Link is possibly my favorite best friend/side kick character I’ve come across. He’s totally boy, totally loyal and surprisingly a great guy. Also there are all these side characters that are wonderful and I know would never make it into the movie just for the sake of time. But their insight and humor had me grinning constantly while I read. Some of my favorites are Ethan’s great aunts who are just ridiculous and endearing. All the characters are beautifully multidimensional. They struggle with who they are, they aren’t totally good or bad, they grow, and they work together. 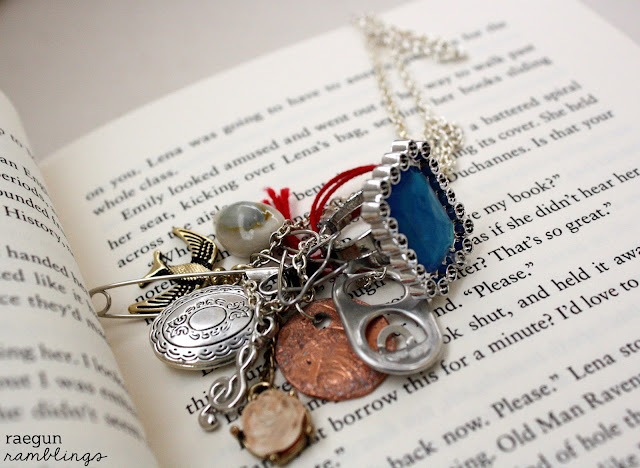 But besides great characters the story is lots of fun. I listened to the first book, Beautiful Creatures, and was immediately drawn into the story. Witches, or rather Casters in an every day American town in the South with Civil War flashbacks was a setting that I loved. If you know me you know I’m all about kids with powers and even better if it takes place in a school setting. The first book didn’t blow me away but I definitely enjoyed it and the audiobook performance is great. The second book, Beautiful Darkness was my least favorite but I still really liked it. More characters were introduced and I became even more attached to the ones I had already met. But the third book Beautiful Chaos, absolutely stole my heart. Seriously. I love love love this book. The characters ALL grow by leaps and bounds and the depth of the story multiplies. It’s fantastic. Book three leaves you with a cliffhanger though so you’ll want to have Beautiful Redemption waiting on the deck. And I can say the final book of the series did not disappoint. It’s a totally different book than the others but in a really good way that makes the story fresh. The direction is completely different than where I expected (and have seen other books) take the story. And it’s a very cool direction.

“A girl who wore a long silver chain around her neck, with tons of stuff dangling from it — a plastic ring from a bubblegum machine, a safety pin, and a bunch of other junk …”

“They aren’t really charms, just things that mean something to me […] I know it looks like a bunch of junk. But I’ve never lived anywhere very long. I’ve never had the same house, or the same room for more than a few years, and sometimes I feel like the little pieces of me on this chain are all I have.”

“I touched her charm necklace. It all looked like junk, and most of it was — the most important junk in the world. And now it had become my junk, too. A flattened penny with a hole in it, from one of those machines at the food court across from the movie theater, where we had gone on our first date. A piece of yarn from the red sweater she had worn to go parking at the water tower, which had become an inside joke between us. The silver button I had given her for luck at the disciplinary meeting. My mom’s little paper-clip star.” 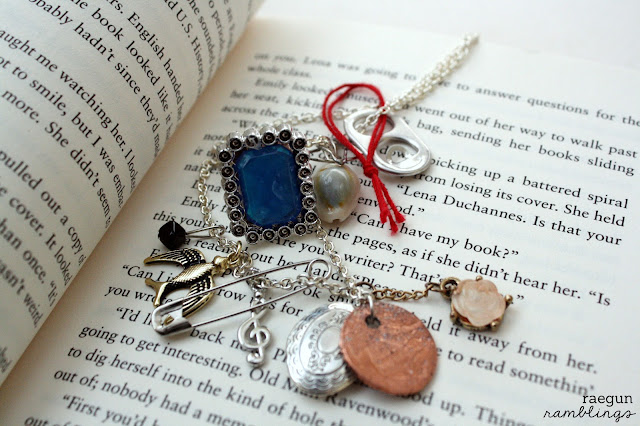 Lena’s necklace is an image that stands out in the books. Through out each of the she adds to her necklace. I knew right away that I wanted to make my own version. You can make one to symbolize things that are important to you but I decided to try and duplicate Lena’s as well as I could. I included:  locket, seashell, soda tab, red string, plastic ring, bird charm, smashed penny, star made from a paper clip, rose pendant, treble clef charm, safety pin, black stone (and I want to add a piece of sea glass and a silver button). Are there any other treasures you can remember that I left off? Most of the trinkets could just be strung onto the chain but for the others I either made a hole or glued a ring to the item. 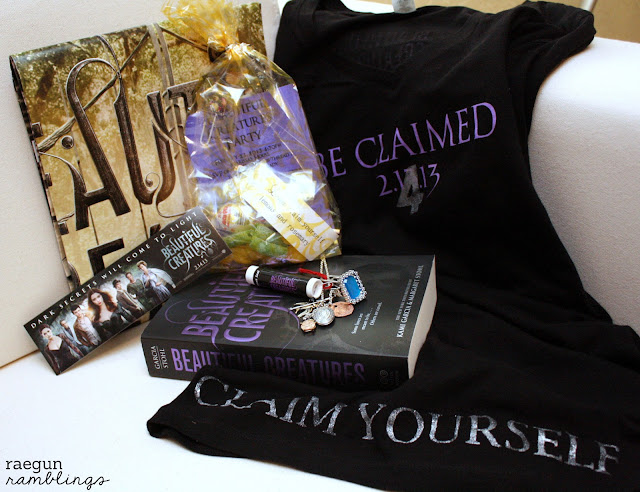 And just for fun I’m giving away all a bunch of Beautiful Creatures goodies. A movie poster, a few bookmarks, themed candy, shirt, and a Lena necklace. Click here to enter the giveaway.

How to Tweak Sewing Patterns