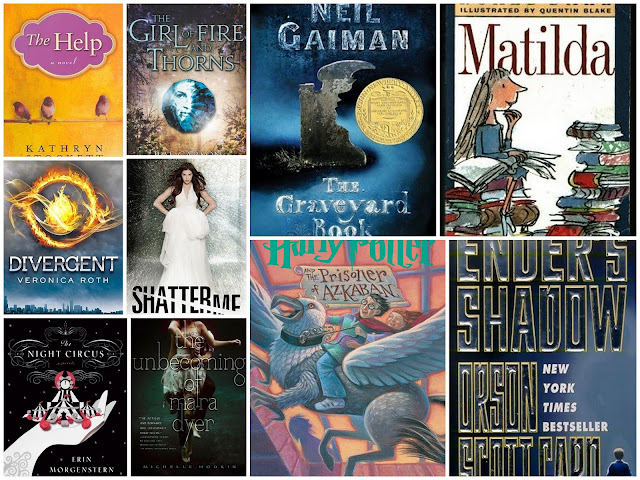 This week’s Top Ten Tuesday with Brooke and the Bookish is “Top Ten Favorite Book Quotes”. I am someone who has written down book quotes for ages. But it seems like I need a better system because there are so many that I loved that I thought I wrote down but now can’t find oh well here’s a handful that I could find. The first one though is my all time favorite it’s stuck with me for years. Check out every one’s list and link up your own here.

Ender’s good, man You just -he doesn’t hate anybody. If you’re a good person, you’re going to like him. You want him to like you. If he likes you, then you’re OK, see? But if you’re scum, he just makes you mad. Just knowing he exists, see? So Ender, he tries to wake up the good part of you.

God’s will. How many times have I heard someone declare their understanding of this thing I find so indefinable?

from The Girl of Fire and Thorns by Rae Carson

But, I’m not … special,” Bailey says, “Not the way they are. I’m not anyone important.”
“I know,” Celia says. “You’re not destined or chosen, I wish I could tell you that you were if that would make it easier, but it’s not true. You’re in the right place at the right time. and you care enough to do what needs to be done. Sometimes that’s enough.

from The Night Circus by Erin Morgenstern

So Matilda’s strong young mind continued to grow, nurtured by the voices of all those authors who had sent their books out into the world like ships on the sea. These books gave Matilda a hopeful and comforting message: You are not alone.

from Matilda by Roald Dahl

Hate looks just like everybody else until it smiles.

from Shatter Me by Tahereh Mafi

And just like that, I made a friend. I mentally patted myself on the back; Daniel would be proud. Mom would be prouder. I planned to offer this news to her like a cat presenting a dead mouse to it’s owner.

from The Unbecoming of Mara Dryer by Michelle Hodkin
Happiness can be found in even the darkest of times, if only one remembers to turn on the light.
from Harry Potter and the Prisoner of Azkaban by J.K. Rowling
You is kind. You is smart. You is important.
from The Help by Kathryn Stockett
He told me once to be brave, and though I have stood still while knives spun toward my face and jumped off a roof, I never thought I would need bravery in the small moments of my life. I do.
from Divergent by Veronica Roth
Really, he thought, if you couldn’t trust a poet to offer sensible advice, who could you trust?
from The Graveyard Book by Neil Gaiman