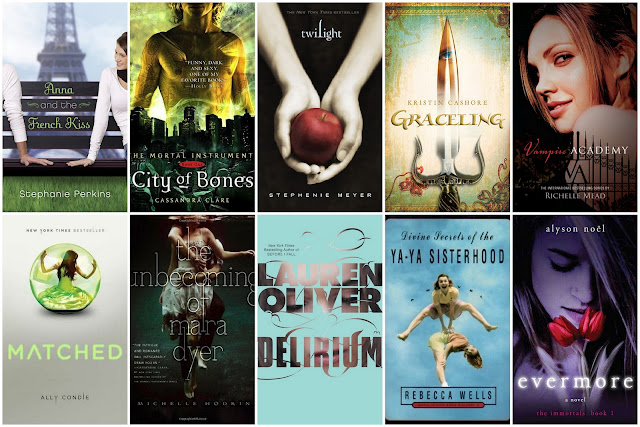 To me there is little better than sitting by the pool or at the beach with a good book. I don’t have any beach trips planned but I’ve heard there are a few beaches in Utah (we’ll see what that means) that I hope enjoy. For those of you lucky enough to have a beach trip planned in your future here are a few reads that would be great to take a long. I’m joining in on Broke and the Bookish’s Top Ten Tuesday. See everyone else’s beach picks here.

To me a good beach book is something kind of light, nothing I have to reread or work to hard to understand, and some romance or appealing love interest definitely doesn’t hurt. Even though I like to think and good amount of action for the beach I don’t want something that is going to stress me out. And while some of these aren’t my all time favorites they were still fun girly reads.


Anna and the French Kiss by Stephanie Perkins- Cute story of a girl at boarding school in France for her Senior Year. Rates high on the chic factor.

City of Bones by Cassandra Claire – I really like these Mortal Instrument books. The characters are great, the friendships and dating relationships. If you like kids with powers and that fight this is a great one.

Twilight by Stephanie Meyers – if you haven’t read this by now you may be boycotting it. But even though Bella can be freaking annoying (after all she’s a teenage girl) the other characters are definitely admirable and it’s a fun quick read. If you have similar tastes to me you should give it a chance.

Graceling or Fire or Bitterblue – I recommend reading these in order of publication although I don’t think they need to be read that way. These are some of my all time favorite books. I love the writing, love the characters, love the story. I think Cashore’s writing is magic.

Vampire Academy by Richelle Mead – definitely on the lighter end. Think boarding school with kids that fight. It’s not so much about vampires as it is about the guardians. These books are lots of fun and easy reading although the first book isn’t the best (but it’s so worth getting through to get to the rest)

Matched by Ally Condie – I struggled with this one at the end. I thought the concept was really cool and even though it wasn’t one of my favorites it’s a fun read for the Summer.

The Unbecoming Mara Dyer – I’ve raved about this one before. The writing is fun and the characters are sassy but with a fun story.

Delirium by Lauren Oliver- the more I think about Delirium the more I like it. It’s a dystopian where love is considered a disease. It was super interesting to think about great friend, family and romantic relationships

Divine Secrets of the Ya-ya Sisterhood – Not so much romance but lots of good girlfriend relationships and to me this just kind of screams Summer.

Evermore by Alyson Noel – Definitely girly, kinda twilight-y in feel but the main character isn’t anywhere as annoying as Bella. The main character is the survivor of an accident and finds herself seeing people’s auras and weird stuff starts happening.