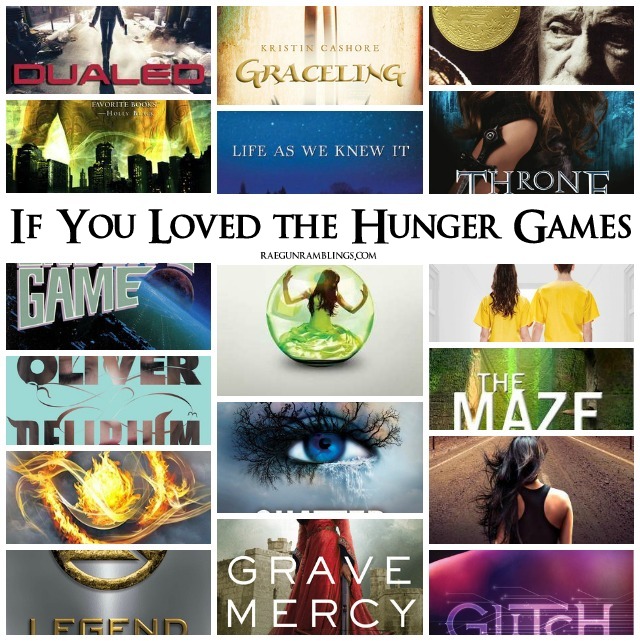 One of the great things about the Hunger Games books is that it reminded so many people that they actually do enjoy reading. But I don’t think most people know what to read next or how to go about finding something good to read. I mean most of use really only have so much leisure time we don’t want to waste it on a book that’s just meh. That’s why I love sharing the books that I have found and enjoyed. To me there’s very little that is more fun than talking to someone about a book that we both enjoyed. It’s like meeting some one who has been on vacation to your favorite place on earth or grew up with people you know. So while we’re in the middle of my Happy Hunger Games series here are some of my favorite books to recommend to people who enjoyed The Hunger Games books! 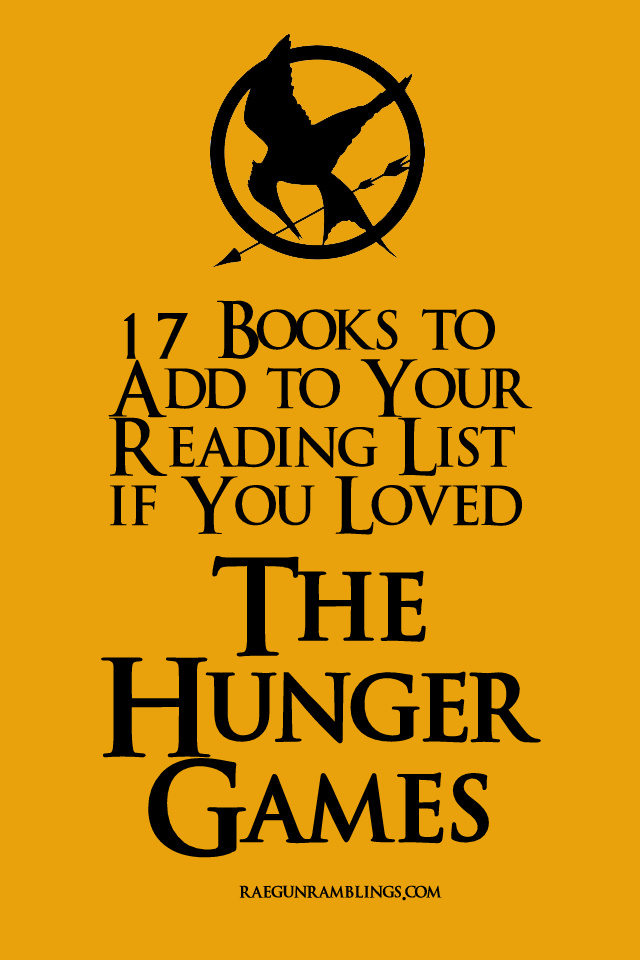 I know I know it’s probably a no brainer and most of you have probably read this one already but, if you haven’t go do it. Like The Hunger Games it’s a dystopian with a strong female main character. It’s a story that as a dose a romance but not too much that boys who turn their noses at the mush stuff should stay away. Also there’s lots of fighting.

This is such a unique story. You get two really strong characters and both a male and female point of view. You really get to watch the character mature and develop and fight for what is right. The this is a completed series and I just adored them all!

You know me Ender’s Game and the Shadow books (the books the follow Bean and the battle school kids) are my all time favorite books. If you liked the war and survival strategy in the Hunger Games and you’re up for hanging out with the brightest and best kids ready to save the world check these out.

Love is a disease in this dystopian where teens undergo operations to make them incapable of feeling properly. The idea is that it protects them and society at large against the delirium. If you liked the fight against the oppressive government in The Hunger Games and the love story this is a good one to pick up. The series is finished but be warned it’s one of those endings that leaves a lot hanging.

The Mortal Instruments by Cassandra Clare

The Mortal Instruments books are some of my favorites, the first is City of Bones. They are VERY different from The Hunger Games, for one there’s magic and fantastical beings like Vampires and Warlocks. It takes place in our world but there happens to be a shadow world of magic right among us. It is not dystopian BUT if you thought that Katniss Everdeen was a kick but heroine then you should meet Clary Fray. There’s fighting, there’s romance, and real friendship and teamwork. If you’re interested in something that has TONS of wit and some of the funniest characters these are loads of fun.

One of the things you always hear when people talk about The Hunger Games is how Katniss is such a strong female character. Well let me tell you she has NOTHING on Katsa, Fire  and Bitterblue. Each of the Graceling books focus on a different girl in the same interwoven world and they are ALL ah-mazing. These are some of my all time favorite books, ever, ever, ever. There’s tons of fighting, there’s romance that is realistic and  admirable, and the portrayal of women and girls is unbeatable.

Matched is another of the dystopians that follow the familiar story line that once the kids hit a certain age are put into a sort of lottery, this time it’s to determine their mate. The government controls all unions through the matching system. The corruption and control of the community, with the reflective female perspective, and revolutionary excitement make it a great match for Hunger Games fans (you see what I did there? oh yeah you do).

In this dystopian a disease has rendered humans infertile. The babies that are born die quickly after birth. As a result there are strict rules on reproduction. Basically teens are expected to get pregnant often to try and see if their babies will survive. Kira strong willed sets out to find a cure. This series is action packed with some great biological and technological related science fiction.

The Program by Suzanne Young

There is a suicide epidemic among the teens and for their own protection there is constant monitoring and everyone is encouraged to report anyone who shows signs of depression. Once identified as a risk (which almost most tens are) the kids are sent to a facility where they undergo treatment to try and prevent their suicidal inklings from panning out. But all the kids come back changed and dulled. I think the Hunger Games fans will relate to the spirit of revolution and fighting against the dangerous

Shatter Me by Tahereh Mafi

If you loved the idea of fighting back of Katniss and Peeta and the rest of them standing up against Snow then you should meet Juliette. These book may catch you off guard at first. I remember thinking, “what am I reading” but I ended up just adoring the series. Talk about fighting, character growth and maturation, and ending that’s totally not the same old same old and some good romance a long the way all lead by a strong powerful girl and you’ve got Shatter Me.

And one of my favorite series for kick butt heroines has got to be Throne of Glass. Like The Hunger Games there is a competition to the death. The prize? To be the king’s champion basically to do his bidding. Celaena is the most deadly of assassins and just a teen. She faces all kinds of opponents and she is amazing. There are some cute boys if you are into a bit of love while you’re fighting and the story gets more and more complex as it goes. It is a 7 book series and only 3 books are out, but be warned while the first two books start out as fun assassin stories the third book has you in full fantasy. But even if fantasy isn’t your favorite I think you might be willing to make an exception since these characters and story lines are just great.

Everyone has chips in them to help control their emotions without the destructive thoughts and impulses there is no more pain or war. Any glitch is supposed to be reported right away so that it can be fixed. In this dystopian you quickly learn that things aren’t as perfect as they want everyone to believe. And once you’ve learned that it’s hard not to want to resist.

In this dystopian everyone has a twin or alt who is raised by another family. When you become “active” some time as a kid or teenager you have 30 days to kill your alt. If  you liked the competition, fight for survival questions of right and wrong, and action of Hunger Games this is perfect for you. I really enjoyed this unique series.

His Fair Assassins by Robin LaFevers

This books are crazy good. They are on this list because they have some great great great strong strong strong female characters. But their greatness and strength isn’t necessarily typical but in their own way they are each amazing. Also these books have some of the best treatment of romance I have seen in young adult books which so so often suffer from instalove or relationships that hardly seem like anything that would survive in the real world. Also a bonus (at least to me) you get royalty, castle life, oh and did I mention assassin teen nuns? Just trust me you want to read these.

These books were not my favorites (I liked them enough to finish and to even read the sequels but they aren’t at the top of my list and all of them had stuff that really bugged me. BUT I saw similarities in them that Hunger Games fans may enjoy and I do know lots of people who really liked these books.

I found these books to be very depressing and stressful. They are about the end of the world. Almost everyone dies and it’s written journal style and is just what you’d expect a teen to write if everyone around her was dying. But they are also a story of fighting for survival. I’m adding them here because even though they totally made me want to buy up some 72 hour kits I think Katniss and Peeta did go through a holy crap everything is totally awful and how is there any hope but we still have to survive type of thing. Plus even as much as I say I don’t like them there’s something about the writing that makes you just want to keep going (I’ve read 3 of the 4 books the first is Life As We New It)

The Giver by Lois Lowry

Classic dystopian. I know lots of people have a warm fuzzy place in their hearts for The Giver but it was not my favorite. It was okay but there are so many other books I like better. But I know that so many people find the corrupt controlling dystopian society to be a natural fit for Hunger Games lovers.

The Maze Runner by James Dashner

I really wish that I liked these books more. I’ve read all except the prequel. I like them alright. I really like the ideas, but for some reason I just didn’t click with the writing. The movie on the other hand I think was pretty great. It didn’t drag like the book for me. But yes another dystopian this time a bunch of boy living in this crazy place with a maze and their memories erased. If you especially liked the parts in the arena in Hunger Games and the whole dystopian set up I think these books would appeal to you.

This post has been a part of my Hunger Games series. Make sure to check back later today to see the other bloggers that shared today!