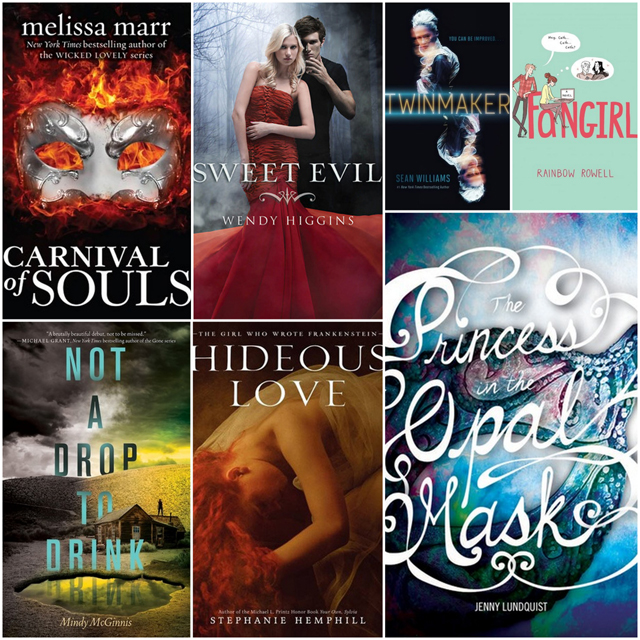 I know I know there’s barely any of 2013 left but I wanted to squeeze in one last What I’ve Been Reading posts. I already mentioned a few of these in my Best Books of 2013 survey but those were mostly just by name. I wanted to give a little more attention and share a few other fun books I’ve had the pleasure of reading over the last month. It has certainly been a great year for reading and I’m so excited for 2014 to see other books and what I thought check out my “read page” on my goodreads.

Carnival of Souls – Fighting, romance, and an awesome new world. Really the world building and magic system were new and fun. It took me a second to get into it but I ended up REALLLLY liking this. If you liked Throne of Glass check this out. Read my full review.

In a city of daimons, rigid class lines separate the powerful from the power-hungry. And at the heart of The City is the Carnival of Souls, where both murder and pleasure are offered up for sale. Once in a generation, the carnival hosts a deadly competition that allows every daimon a chance to join the ruling elite. Without the competition, Aya and Kaleb would both face bleak futures—if for different reasons. For each of them, fighting to the death is the only way to try to live.

All Mallory knows of The City is that her father—and every other witch there—fled it for a life in exile in the human world. Instead of a typical teenage life full of friends and maybe even a little romance, Mallory scans quiet streets for threats, hides herself away, and trains to be lethal. She knows it’s only a matter of time until a daimon finds her and her father, so she readies herself for the inevitable.While Mallory possesses little knowledge of The City, every inhabitant of The City knows of her. There are plans for Mallory, and soon she, too, will be drawn into the decadence and danger that is the Carnival of Souls.

Sweet Evil – I liked this much more than I was expecting to. I’m not usually a fan of angel/demon books this reads way more like demigods though which I do enjoy. It reminded me of some of Rick Riordan’s books but for a more mature audience. Parts came across as preachy but the rest was enjoyable that even that didn’t bug me too much. I’m looking forward to the rest of the series. My full review here.

What if there were teens whose lives literally depended on being bad influences?

This is the reality for sons and daughters of fallen angels.
Tenderhearted Southern girl Anna Whitt was born with the sixth sense to see and feel emotions of other people. She’s aware of a struggle within herself, an inexplicable pull toward danger, but it isn’t until she turns sixteen and meets the alluring Kaidan Rowe that she discovers her terrifying heritage and her willpower is put to the test. He’s the boy your daddy warned you about. If only someone had warned Anna.

Forced to face her destiny, will Anna embrace her halo or her horns?

Twinmaker – It’s kind of like the ship of Theseus (or that TV kid in Willy Wonka) but with people. Are you still YOU if you’re completely broken down and put back together? This has a fun and different dystopian feel. I loved that the philosophy and story tied together but it never felt like name dropping or like it was trying to be smarty it just feed the story. See my full review.

You can be Improved….

In a near-future world in which technology can transport you anywhere instantly, can a coded note enable you to change your body—to become taller, stronger, more beautiful? Clair is pretty sure the offer is too good to be true. But her best friend, Libby, is determined to give it a try, longing for a new, improved version of herself.

What starts as Libby’s dream turns into Clair’s nightmare when Libby falls foul of a deadly trap. With the help of Jesse, the school freak, and a mysterious—but powerful—stranger called Q, Clair’s attempt to protect Libby leads her to an unimagined world of conspiracies and cover-ups. Soon her own life is at risk, and Clair is chased across the world in a desperate race against time.

Fangirl – You know my love for Harry Potter. Well Cath is pretty much a Potter-head (read Simon Snow as Harry Potter). This is a sweet contemporary tale about writing and fandoms and starting college. Definitely a cute read I am excited to read more from Rainbow Rowell. My full review here.

Cath is a Simon Snow fan.

But for Cath, being a fan is her life — and she’s really good at it. She and her twin sister, Wren, ensconced themselves in the Simon Snow series when they were just kids; it’s what got them through their mother leaving.

Reading. Rereading. Hanging out in Simon Snow forums, writing Simon Snow fan fiction, dressing up like the characters for every movie premiere.

Cath’s sister has mostly grown away from fandom, but Cath can’t let go. She doesn’t want to.

Now that they’re going to college, Wren has told Cath she doesn’t want to be roommates. Cath is on her own, completely outside of her comfort zone. She’s got a surly roommate with a charming, always-around boyfriend, a fiction-writing professor who thinks fan fiction is the end of the civilized world, a handsome classmate who only wants to talk about words . . . And she can’t stop worrying about her dad, who’s loving and fragile and has never really been alone.

For Cath, the question is: Can she do this?

Can she make it without Wren holding her hand? Is she ready to start living her own life? Writing her own stories?

And does she even want to move on if it means leaving Simon Snow behind?

Not a Drop to Drink – I’ve been a bit burnt on post-apocolytic books so when this appeared to review I put it off. BUT I’m glad I read it because it was really good. It didn’t have the normal things like wandering around barren wastelands that I’ve grown tired of. The story is interesting and fresh, not always happy but somehow that was okay (and you know I’m a resolution happily ever after type). There was the same allure of the Life As We Knew It although quite a different setting and it didn’t feel depressing like LAWKI did. Full review here.

Lynn knows every threat to her pond: drought, a snowless winter, coyotes, and, most importantly, people looking for a drink. She makes sure anyone who comes near the pond leaves thirsty, or doesn’t leave at all.

Confident in her own abilities, Lynn has no use for the world beyond the nearby fields and forest. Having a life means dedicating it to survival, and the constant work of gathering wood and water. Having a pond requires the fortitude to protect it, something Mother taught her well during their quiet hours on the rooftop, rifles in hand.

But wisps of smoke on the horizon mean one thing: strangers. The mysterious footprints by the pond, nighttime threats, and gunshots make it all too clear Lynn has exactly what they want, and they won’t stop until they get it….

Hideous Love – This book was totally out of my comfort zone but I’m glad I read it. Well I listened to it. It’s written in verse which is rough for me but usually that goes away in the audiobook so you might want to consider the audibook if you’re a verse hater. The story was fascinating. I kept finding new tasks to do to keep listening. If you like historical fiction check this out. See my full review.

Hideous Love is the fascinating story of Gothic novelist Mary Shelley, who as a teen girl fled her restrictive home only to find herself in the shadow of a brilliant but moody boyfriend, famed poet Percy Shelley. It is the story of the mastermind behind one of the most iconic figures in all of literature: a monster constructed out of dead bodies and brought to life by the tragic Dr. Frankenstein.

Mary wrote Frankenstein at the age of nineteen, but inspiration for the monster came from her life-the atmospheric European settings she visited, the dramas swirling around her, and the stimulating philosophical discussions with the greatest minds of the period, like her close friend, Lord Byron.

This luminous verse novel from award-winning author Stephanie Hemphill reveals how Mary Shelley became one of the most celebrated authors in history.

The Princess in the Opal Mask – This was hands down of one of my favorite books of the year! It arrived when I was in the throws of Halloween costumes and I only wish that I had read it sooner. It is SO good. If you like a good princess story with political intrigue, interesting characters, and a unique story check this out. I’m not usually too picky about writing style (unless it bugs me) but so many sentences stood out while I was reading. The writing is lovely as well as the content. Although it’s different I think fans of The False Prince and His Fair Assassins would enjoy this. But really I think MOST YA fans would enjoy this. Do yourself a favor and pick it up! My full review.

Orphaned as a child in the crumbling village of Tulan, Elara is determined to learn her true identity, even if it means wielding a dagger. Meanwhile, in Galandria’s royal capital, Princess Wilha stands out as someone to either worship or fear. Though no one knows why the king has always made her conceal her face–including Wilha herself.

When an assassination attempt threatens the peace of neighboring kingdoms, Elara and Wilha are brought face to face . . . with a chance at claiming new identities. However, with dark revelations now surfacing, both girls will need to decide if brighter futures are worth the binding risks.