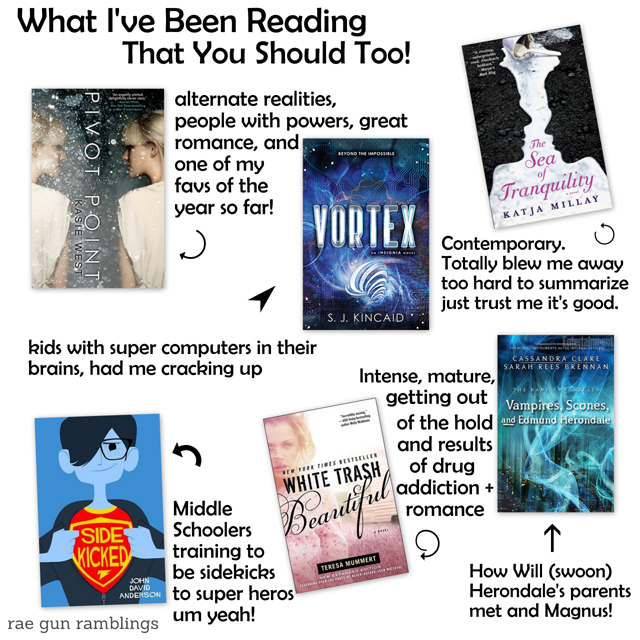 I’ve read a ton of great, but also very different, books lately. I feel like I had a great run and then a good run and then this last bunch really impressed me.

Pivot Point – Alternate realities, a hidden community full of people with super powers, kids with powers learning how to use them in a school setting, lots of action, romance and fun. I LOVED this book it’s definitely one of my favorites that I read this year. There are so many interesting powers and details to the world but just to give you a peek at what the book is about, the main character has the ability to see two different future paths while she can’t do anything to change the future she can pick to go with the best future. She’s faced with the decision of whether or not to move out of the compound to live with the norms so she “searches” we get to see where both paths would lead but it’s not just about who she will miss. Serious things are going on and we get to see it from two sides. The story is so well thought out and intertwines perfectly I really really like this one. If you have similar tastes as me I say go grab a copy now.

The Bitter Kingdom – For the love, if you have not started the Fire and Thorn series (which starts with Girl of Fire and Thorns) please do. It’s a crazy unique, absolutely awesome fantasy tale with a great strong, in an untraditional way, heroine. This is the last book of the trilogy and it completes the story perfectly (the second book, Crown of Embers, blew me away and it’s what I now compare all sequels to). Great action, fighting powers, romance (mature non-instalove romance), and absolutely wonderful characters. If you haven’t read the first two you’ve got some time but seriously do yourself a favor and pre-order (or put your library hold on) this baby now since it comes out later this month.

The Sea of Tranquility – I listened to this and it totally blew me away. It’s a contemporary but about two very damaged people. Damaged in very different ways. And they find the ability to help each other. It’s messy and stuff is definitely not easy but there is something so beautiful about this story. While it’s YA there’s mature content (drinking, sex, language, abuse, etc.). And while it sounds heavy as I type it out I never felt dragged down. There was hope and honestly through all of it. I wasn’t expected to be so taken by this book but it definitely won me over.

Vortex – I’ve already shared my love for Insignia and I’m happy to report that I really enjoyed this sequel. I found myself laughing hysterically by myself wishing I wasn’t the first of my friends to have read the book because some of the parts were so stinking funny. In fact my sister is currently reading it and has been messaging me quotes. Think of the story as a kind of Harry Potter meets Ender’s Game. A boarding school setting, a great group of brilliant friends with cool powers, this time it’s that they have super computers installed in their brains. It’s fun, just trust me and it’s definitely great for boys and girls a like.

Sidekicked – If you’re looking for a cute super hero book for the younger bunch this midgrade story of a sidekick training program that takes place in the basement of the local middle school is good fun. I listened to it was definitely drawn into the story.

White Trash Beautiful – This book is kind of a different book from the normal type I read but I really liked it. I listened to the audiobook and found myself staying extra long in the car or making up tasks around the house just so I could listen to it longer. I’m not sure what to exactly categorize it but if it’s meant to be YA I’d say it should be for a very very mature young person. There is a lot of violence, drug addition, rape, and just mature themes. Even with all of that which I usually shy away from there is a lovely romance and story of hope and making more for yourself. I really enjoyed it and definitely would recommend the audiobook.

Vampires, Scones, and Edmund Herondale – Now keep in mind that this is a short little novella. But I do want to say that this was my favorite of the Bane Chronicles so far. I love listening to them and if possible I would definitely recommend that. This is the story of how Will (swoon) Herondale’s parents met. Yup you know you want to read it.

Invisibility – While I liked this, I was expecting to be blown away and I was not. The characters and setting was cute and lovely and I found myself laughing and smiling a lot. The problem was that the main conflict and overall plot fell a bit flat for me but then again that was such a quick part of the book. So while I liked a great deal it just felt fast when the action was happening and I’ve said before that I am a resolution girl and this one did not tie up all the loose ends which for me makes it a little tough. But I do think it’s worth reading.

Carrier of the Mark and Shadow of the Mark – Oh these books they are so great in some ways and so annoying in others. So here kids with powers in Ireland. Great mythology. Romance. Friendship. Secret Societies. Some of the prettiest covers I’ve seen. Yeah I really like them and I really enjoyed the story telling. My only issue is that they suffer greatly from instalove-I-can’t-live-wtihout-him syndrome and at times it was a bit much for me. But then again the story, world, and the characters aside from that are SO fun. I will most definitely be reading the rest of the series (and I was able to listen to these which I recommend) but I just thought I should warn you -instalove.