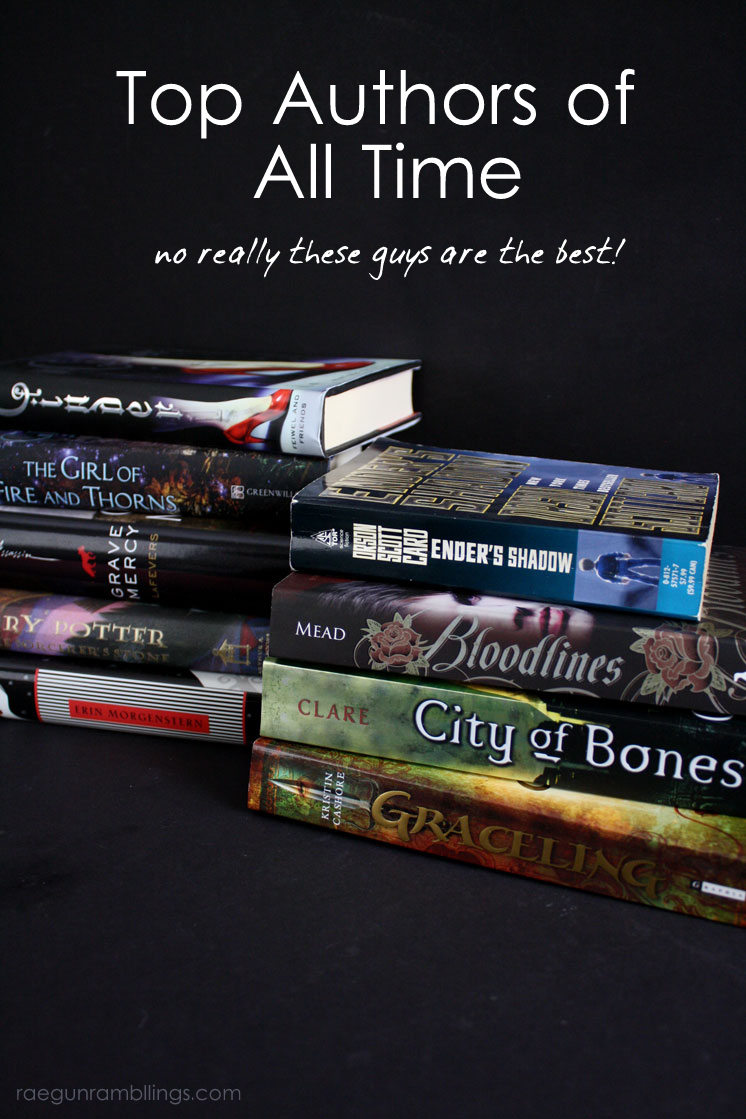 I get anxiety when someone asks who my favorite author is. I mean goodness I need context, are you looking for a book suggestion, is it just small talk (no that can’t book books are never SMALL talk), how could I possibly pick? There are just so many good books and I know so many great books I haven’t read yet or haven’t even heard about!

But even still, I thought it would be fun torture to try and force myself to play along with the Broke and the Bookish gals and share my Top Ten Authors of All Time. These are authors that I adore what I’ve read from them, wish they would write more and more and more, and have recommended their stories over and over. And most of all they are authors that have written stories and characters that I just clicked with!

In no particular order my Top Ten Authors of All Time:

She makes the list purely based on the Harry Potter books. I haven’t read the other ones but come on Harry Potter is ENOUGH! I will get to her non-potter books. In fact let me go add them to my library holds right now. Okay I’m back. But really the world building, the magic, the friendships, the adventure, it doesn’t get much better!

Ender’s Game was probably my first ever favorite book. And I’ve read the Shadow books that continue the series over and over. I am not a re-reader but these books are the wonderful exception. I’ve read a few other of card’s series and he’s a magician with the people and emotions and relationships. I’m more into the light Sci-fi, political strategic side of his works. But really it’s the characters for me but don’t get me wrong I adore his stories too!

Goodness the Graceling books have so many things I love about books without being predictable and formulaic. Romance, kids with powers, fighting, amazing strong female characters and more. The relationships are so great and the stories are so so so unique and full of adventure. Goodness I just want more and more and more.

The Girl of Fire and Thorn books blew me away. Carson did many things in these books that usually would make me SO mad but amazingly enough they fit the story so well and she TOLD the story so well I didn’t mind. I let them impact me as they were meant to but didn’t ache to rewrite the story. Uniquely strong and real female characters that are so admirable, realistic romance, and just enough fantasy and adventure were some of the highlights but what I really loved was her honest depiction of a person of faith. Amazing how accurately she captured the struggle and commitment for the religious life even while not embracing it herself. These books are SO good and I can’t wait until her next book Walk on Earth a Stranger which is due out in September.

Richelle Mead writes like candy crack and that’s the truth. But the thing is it’s not shallow foofy stuff. Granted her work is lighter and not quite as deep as some of the other authors on this list but there’s still substance to them while being freakishly fun. She has sass and humor down, she knows how to suck you in and her boys are dreamy and her girls can kick butt most of the time literally! I’ve read both her YA and Adult books and while I think that the first books of her series are always a bit slow (something about the way she introduces the characters and sets up the worlds) once you get that preliminary stuff out of the way you can’t turn back. Even if you are a Vampire hater like I was ignore the title and pick up Vampire Academy the series and spin off are SO good. If you’re like me you’ll be driving from library to library to get the next one before they close on Sunday (true story). 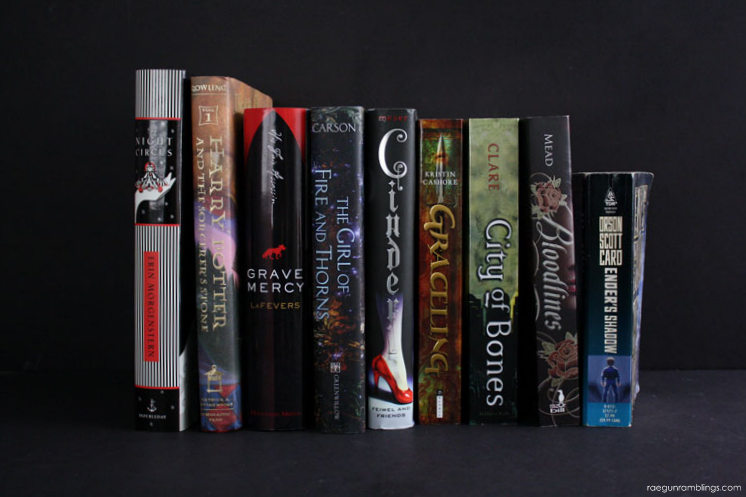 For the love of steaming HEALTHY, noteworthy romances that are things to admire plus crazy adventure and gorgeous writing. The His Fair Assassins books are full of depth and meaning and all kinds of admirable stuff without being preachy in any way shape or form. They are the epitome of good entertainment where I’m concerned. Historical fiction, assassin teen nuns, royalty and castle life, tough situations, these books are so unique but at the same time so good. I hope she keeps writing YA because these are good. I’ve been meaning to check out her middle grade books but I have a hold for the first book of the Theodosia series.

Yes I know she only has one book, The Night Circus but it was so ah-mazing. It put a spell on me and I want more. This book is so unique and the story is told jumping back and forth between different years. The imagery is incredible I want to make so many things from this story. I only wish I could get lost in more stories from her!

Her books are SO fun. These are more on the lighter side but I adore the adventure and the awesome Shadowhunter world that she has built. Plus she is a master of humor and happy endings. I believe that the phrase So Many Feels was created just to be able to describe her books. The non-romantic friendships are so great, the romance is awesome, but the banter and adventure make me come back for more and more and more. Thankfully she seems happy to crank out books.

And to think I thought Cinder sounded so dumb when I first heard about it. I’ve had to eat my words on that one SO many times because Marissa Meyer is a story telling genius. Really I swear her books just keep getting better and better. She dives in to focusing on a new character and you think you’ll be sad not to still be focused on the first batch but she ties it all in and the new characters are so awesome it’s like a happy land of awesomeness. Okay that probably didn’t make much sense but you should just read it as gush gush gush because it’s hard to write how great I think her books are. She’s landed squarely in the buy without question list for me. Sci-fi (but not annoying creatures, more technology and powers), fairy-tales, swoon worthy boys, strong and capable girls, lots of action, and crazy interwoven story lines!

I’ve had this post written up for almost two weeks now trying to figure out who would grab the last place and while there were a few I tossed around like Marie Lu and Jandy Nelson both amazing story tellers, in the end I couldn’t pick. And I think it’s because I know there’s someone who I haven’t meet yet. There’s an author who’s stories I have yet to fall in love with, maybe who has yet to publish their book. Whatever the case. The rest of the writers on this list all grabbed me and wouldn’t let go. I believe that the owner of spot #10 will do the same when it’s his or her time.

What about you? Who would you say are some of your all time favorite authors? 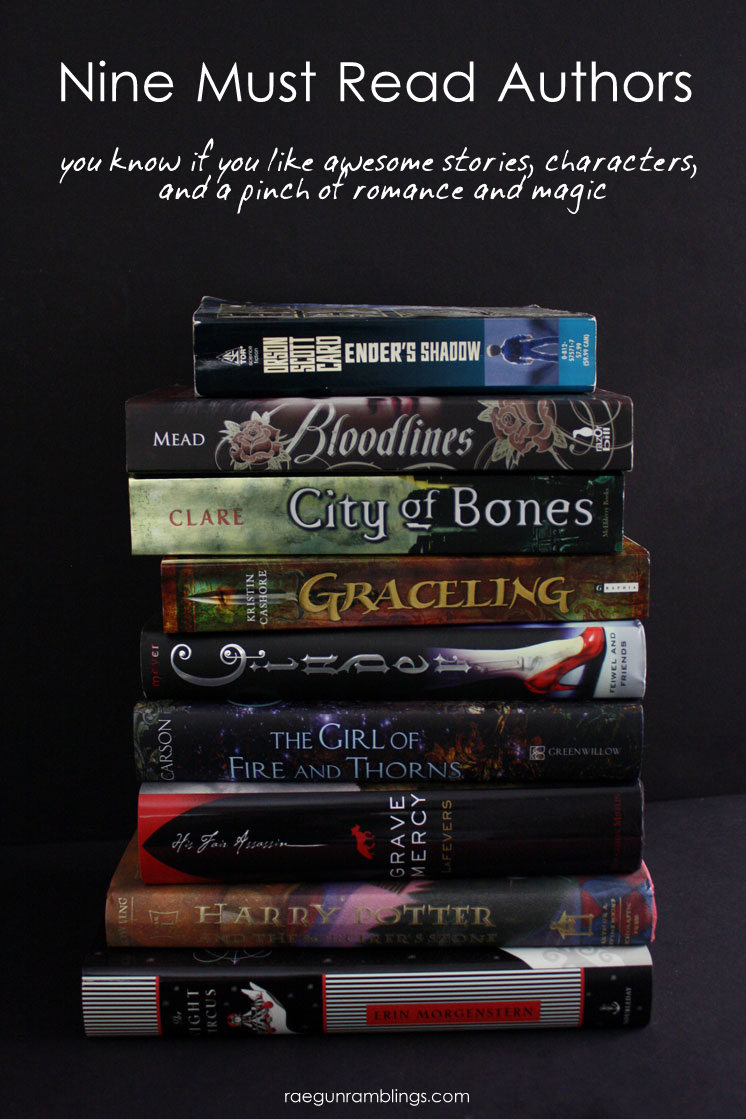