To celebrate Jamie from The Broke and the Bookish‘s wedding this weeks top ten is all about romance. It’s supposed to be top 10 that would last in the real world but I read so much YA that I’m going to spin it a bit and tell you what I love about 10 (er 7) book couples I admire since really I’m not sure you can tell who you are meant to be with at 17. See my full reviews and if you want becomes friends at my Goodreads.

And happy happy wedding wishes to Jamie! She tweeted earlier today about making bookish centerpieces. A girl after my own heart!

Fire and Brigan from Fire by Kristen Cashore – I think they would last in the real world. I think they bring out the best in each other and they just seem honest and realistic.

Tris and Four from Divergent by Veronica Roth – I’m not sure if they’d last but I love the way their romance develops from respect and shared values. It just seems healthy. I also appreciate the life-like tension and the way the deal with being frustrated with each other but remain focused on what is really important in Insurgent.

Petra and Bean from the Shadow books by Orson Scott Card – They work together so well and understand the other person almost better than they understand themselves. While they may be frustrated with each other at times they take the others personality seriously. I think that’s important in real life. Your personality is going to be different than your partners in some ways and being able to see where they are coming from and why they think a certain way (even if you disagree) is valuable.

Ron and Hermione from the Harry Potter books by J.K. Rowling – What could be better that being married to your best friend? More than that a friend that complements you, who’s strengths differ than yours and supplement yours wonderfully.

Katsa and Po from Graceling by Kristen Cashore – I love how passionate they are with each other. And I love how they can fight, apologize, and return to each other.

Katniss and Peeta from The Hunger Games by Suzanne Collins – I think their relationship is interesting. I’ve never thought Katniss deserved Peeta. I just didn’t think she loved him enough. But I think that she is committed and loves in probably the only way someone as broken and traumatized as she is could. And I love his love for her and I want him to have what he wants. We go through hard things in real life too, love is messy and takes a variety of paths. And I do think in the end what they have is real and deep and true.

Tessa and Will from The Infernal Devices by Cassandra Clare – I love Jem I do, I just think that Will is a better fit for Tessa. He maybe a bit moody and reckless but as much as love and feelings aren’t enough, they are important. The chemistry is just so apparent and I think they’d be so good together. I’m about dying waiting for the next book to see what transpires ugg March 19th seems so far away. 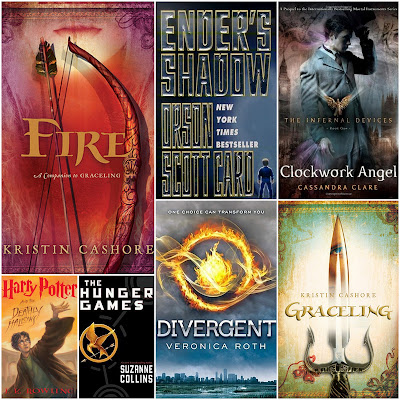 I’m trying hard to come up with more but I can’t. Don’t get me wrong if this was a post about crush worthy characters I’d have no problem. But all the couples I can think of to me just seem too young so I wonder if they’d cut it in the real world or the way they come together suffers, like so many YA books, from instalove.

What I’ve Been Reading: Ups and Kinda Downs

TTT: Some of My Favorite Bookish Memories

10 Books to Read for an Adventure